Most of you will know the song, many of you will sing it week in and week out, either standing on our famous Spion Kop or sitting at home on your sofa watching the game. The question is, do you know the story behind it?

The chant was first heard on the famous Standing Kop in the 60’s, during my personal favourite time in Liverpool history under, in my opinion, the greatest manger who ever lived Bill Shankly. There’s two distinct tunes in the song, even though they do blend well together. The first tune is ‘Red River Valley’ and the second part is a tune called ‘The Sash’.

Although the song was first sang on the Kop in the 60’s there is one distinct modification that many of you will know about. In 1982 we had a historic Merseyside derby win against our rivals Everton, the song boasts Ian Rush’s four goals in the game in an almost mocking way towards our counterparts across Stanley Park. This can usually be followed with a rousing verse of  ‘all you need is Rush’ to the tune of The Beatles classic ‘All you need is love’.

The story is about a young Scouser who’s sent off to fight in the war, unfortunately the lad is shot down and with his last breaths he utters the verse that begins with ‘oh I am a Liverpudlian’ just to show his love for the team he supports. One common misconception is the line ‘Under the Libyan sun’ many confuse this with ‘Under the Arabian sun’ or ‘Under the Radiant Sun’. However, the line is ‘Under the Libyan’ so don’t forget that next time you’re in the stands!

I hope you’ve enjoyed this breif history of the Kop classic. Hopefully of the course of the next few weeks I’ll bring more stories behind Kop chants, especially those that are lesser known such as ‘Those Were The Days My Friend’ and ‘The Reds Are Coming Up The Hill Boys’.

That’s it for now, thanks for reading!

Can I tell you the story of a poor boy

Who was sent far away from his home

To fight for his king and his country

And also the old folks back home

Now they put him in a Highland division

Sent him off to a far foreign land

Where the flies flew around in their thousands

And there’s nothing to see but the sand

Well the battle started next morning

Under the Libyan sun

I remember that poor Scouser Tommy

Who was shot by an old nazi gun

As he lay on the battle field dying (dying dying)

With blood gushing out of his head

As he lay on the battle field dying (dying dying)

These were the last words he said…

Ohhhhhh… I am a Liverpudlian

I come from the Spion Kop

I go there quite a lot* (Every Week)

We support the team thats dressed in Red

A team that you all know

A team that we call Liverpool

And to glory we will go

And we’ve been to Europe too

We played the toffees for a laugh

And we left them feeling blue – Five Nil!

All You Need Is Rush, Rush,

Rush Is All You Need. 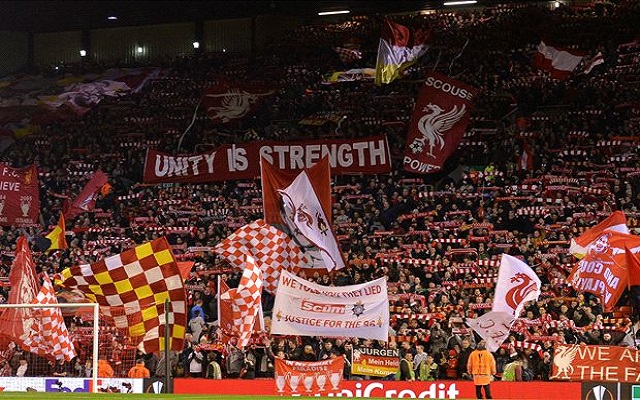