Good first-half there from the lads. Not a lot of quality on the ball, but like the Stoke match, the team are working incredibly hard, and everyone is pulling their weight

Given that Spurs were arguably the favourites for this match, we’ve limited them to half-chances. Alright our goal was more or less a half-chance as well, but what a finish by Dirk Kuyt. People criticize his finishing, and sometimes rightly so, but he is a striker, and was prolific at Feyenoord, and maybe that was a flashback to more ‘lethal’ times for the Dutchman. Either way, he has the instinct, if not the application of a true finisher.

Reckon Spurs can be a little hard-done by by that penalty-shout, but they have had their luck this season as well so. Plus that free-kick (and subsequent yellow-card) that Mascherano conceded was a bit soft as well. Crouch just decked over simple as that.

Albert Riera is not really getting into the game that  much. Seen very little of the ball. Degen looking solid down that right-hand flank. Hope to see Rodriguez come on in the second-half though.

Could we have gone 2-0 up towards the end of the second-half? Skrtel had the best opportunity of the half, barring the goal for us, where he put it over the bar. Had it been a more accomplished finisher with that chance, would be be going in with a bigger cushion? Having said that, Spurs showed what they are capable of with that chance for Modric. Reina saved well, but the defence was cut in two by a simple drag-back. Need to keep an eye on that. ‘Arry won’t be happy with some of his players, and he will say it to them at half-time.

Overall a decent first 45 minutes, but we need to keep our composure in the second-half. No switching off or Spurs will do us over, like they did in the match at White Hart Lane last season, and to an extent earlier this season, and of course the late goal we conceded against Stoke will be fresh in our minds.

Still a long way to go yet, but we are on course. Heres hoping that the team keep on battling in the second-half. Still all to play for – for both teams. 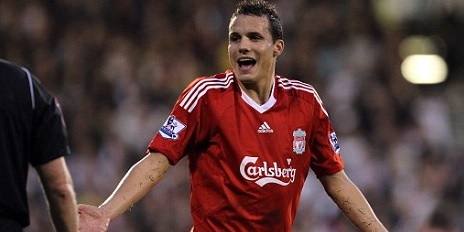