” Steven Gerrard picks out Joe Cole with a cross field ball, Cole with a lovely pass to the Spaniard, he gets past one, past two, rounds off the keeper and finishes it off with a superb strike. Fernando Torres- the man of the moment, a Kop Legend”.

Just last week i was dreaming of this. Those words were ringing if my ears as i anticipated the start of the new season. Having added Joe Cole to the squad, we would have a deadly front trio.

Alot has happened since my last post, and alot has happend since Joe Cole’s signing. Steven Gerrard pledged his future to the club, lets be honest- we had no doubts about that. But Fernando? Still remains a mystery.

Hes a world class striker, a legend in the making, probably the best of his generation, everyone loves him, i love him too. But i can proudly say i love Liverpool Football Club way more.

I would love it if Fernando would stay, hes probably been our best player of recent times and might still have something to offer. But frankly, his current situation is pissing me off. He, just like Mascherano are beginning to think that they are bigger than the club. Im going to give Torres the benefit of the doubt and truly believe anything once it comes from his mouth. But i would have appreciated it if he had already committed his future to the club. When asked about his LFC future, his reply “we’ll see after the World Cup”. When Kuyt was asked the same two days before the most important match of his career, his reply was far different.

No one is bigger then the club, not the owners, not the manager, nor the star players. Not Fernando, not Gerrard, not Fowler, not Dalglish. Liverpool FC is at the top. Not its players. If Fernando wants to go, we shouldn’t stand in his way. Even after what Hodgson has said to him, even after all LFC fans have expressed their love for Torres, even after whatever Purslow has told him, he still has to ‘think about his future’ then please be so kind as to leave us and ensure your new club drop off 50m to 60m. Even if Torres does stay now, i will see him as a different player, a player who wanted to leave but had to be ‘convinced to stay’.

Truth is that if he does go, we will cry about it and cry about how screwed we are, but with time we’ll realise that it isnt the end of the world. There will still be a big bright light shining at the end of the tunnel.

Again, i would love it if he stayed, and i know it would be nearly impossible in our situation to directly replace him with a single player. But we very well could sign two quality player who can remain fit. Selling a star striker for 50-60m who is bound to get injured at some point of the season and replace him with two lesser in quality but quality and fit strikers nevertheless isn’t that bad.

We might as well see Torres come out in the next few days and commit himself to our beloved club, but if he really really wants to leave, i wouldn’t stand in his way. He probably ‘deserves better’ than the best fans in the world.

I’m not jumping to any conclusions, i want him to stay, i hope he does, but if he is going to stay with the attitude of “I’m the best guy around here, I’m bigger than the club” then selling him wouldn’t be the worst option. Its all upto you now Fernando, its your choice. Hogdson has said he has done what he can, Purslow probably has, Gerrard has committed, Joe has signed, its your choice where you want to stay. LFC will always welcome you, but also LFC has a rich enough history and passionate enough fans to live without you. The balls in your court, its your choice.  More of this will be well appreciated: 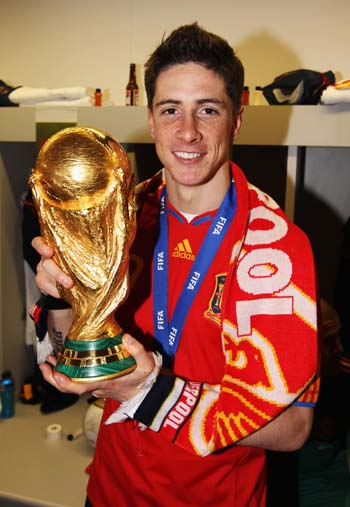