To my fellow REDS,

At last !! A performance from our RED MEN that we can be proud of !!
Keep it up and we can smile at the storm that will be passing soon.. giving way to the golden sky !!
http://www.lscm.com.my/index.php?option=com_content&view=article&id=242&catid=47&Itemid=41

It has been a long time coming.. but after what we have gone through so far this season.. we gladly embrace this precious win, and more so the encouraging performance by our RED MEN that came with it !!!

With intense speculations surrounding the future of Roy Hodgson, he set out what would possibly be our current best-11 in many ways.

Reina had Skrtel & Kyrgiakos in the middle while Carragher reprised his role at rightback while Konchesky resumed leftback duties.

In the middle of the park, Meireles & Lucas partnered each other to link up play with Torres and Gerrard upfront as Maxi and Cole operated at the flanks.

But it has to be said that the choice of Meireles & Lucas is proving to be the better combination compared to what we have suffered so far. Poulsen in the equation has not proven solid enough. And pushing back Gerrard into the middle of the park negates the attacking sting he brings when he is further up the pitch.

Admittedly, Lucas still sprays the odd bad passes.. but he makes up for it with his work-rate and tackling. Ok fine, he still has to work on his headers after a finely crafted set-piece corner flew to his head that he headed wide.. off the mark.. from point-blank range !! But let’s give credit where it’s due.

Now Meireles, he is a gem.. unpolished and just waiting to glitter in due time to show it’s worth. It was an outstanding game by the Portuguese guarding the midfield and also freely supporting the attack in all parts of the field. It kinds off remind you of Mascherano, minus the rash tackles early in his Liverpool career. But Raul can still pick up some tricks in stealing the ball in tight situations from the opposition rather than just stand his ground.

Attack-wise, Joe Cole always possessed the flair and work-rate. His forte is getting into goal-scoring situations.. but he will need to score rather than having his shot saved. A brilliant move set him up nicely only to be denied by Paul Robinson early in the game. Then Meireles just scuffs the rebound on his weaker left leg.

But, in my opinion, the player that scaled the heights above expectations has to be Maxi Rodriguez. He played out a brilliant support role and was a constant thorn in the Blackburn defence. Short, quick passes and clever runs into space just amplifies the good that Rafa saw in him despite his age. There were so many breakthroughs in the first half, all from his darting runs in & out of the box. Could it be any chance due to Johnson’s absence, thereby giving him the room & green light to express freely rather than having to look out for the current England rightback.

Speaking of which, I thought Carragher did a good job protecting our right side of defence. Jamie was equally eager to join in the attacks and provide that quick delivery for Maxi or even Torres to chase. Fine, Carra adds another to his unwanted OG collection. It wasn’t really his fault when Konchesky’s clearance hit him flat on the face and rebounded into goal after good work by Benjani.

And all that after Kyrgiakos gave us a well-deserved lead right into the second half with a header that Olsson diverted into goal. Our Greek has certainly been a TOWERING RED, commanding in the air and equally tenacious in his challenges. He may be sold for speed but he makes up for it with his fighting spirit and drive for the ball.

Speaking of which, Martin Skrtel has gradually excelled into his role as the cool centre-half. Precise in tackling and equally adept in clearing the ball. Together with Soto, they make Reina’s job much easier in dealing with the crosses and aerial barrage that comes.

Konchesky on the left side of defence was simply delightful, strong in tackling but even more adventurous supporting the attack on the left with his darting runs. This takes away the attention of some Blackburn defenders to allow Joe Cole more space to work with.

And with such high level of cooperation and team ethos on the pitch, no wonder Torres was applauding all the hard work done each time a good pass comes to him. And Gerrard was just happy to do his part driving things along. In fact, it could have capped a fine move when Reina released him on a counter-attack. As the advancing horde of RED MEN descended on Paul Robinson’s goal, the move presented Stevie G with an in-step shot to the top corner.. only to be saved brilliantly by Robinson, who showed why he was once England’s No 1 keeper.

Finally the winner.. it was just a simple cross by Cole, angled and collected by Torres at the far side who stayed onside.. and deftly placed the ball away from the keeper rather than blazing it over the bar as other strikers might end up doing.

A simple winner by Torres, but more importantly.. it puts back the smile on his face.. and his teammates.. and all of us fans.. worldwide. 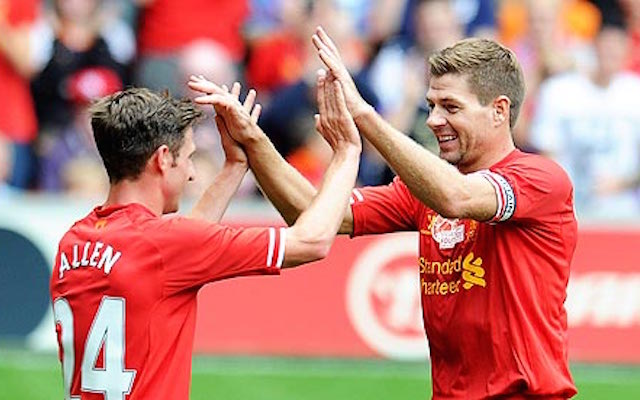