The Chelsea v Liverpool game gave the biggest insight yet into what Kenny believes to be his strongest eleven and his best system. The key to winning the game was how we operated in midfield, completely stopping Chelsea’s front six from playing.

Lucas partnered Gerrard, Meireles and at times even Skrtel in a very fluid central midfield. Lucas and Gerrard started as the central two but their average positions for the match demonstrate just how different their roles were: 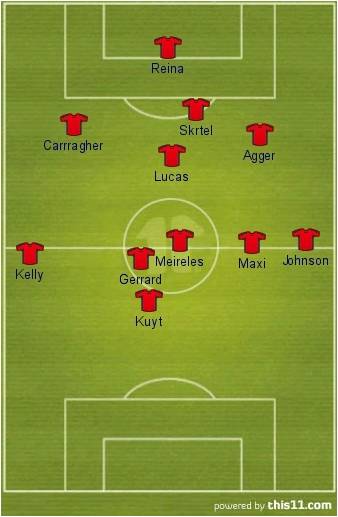 Lucas’ average position was directly in front of Skrtel, significantly further back than Gerrard, whose average position was actually in front of Meireles. Gerrard being this far forward when playing in central midfield would normally be a cause for concern, but against Chelsea he and Meireles were able to support Kuyt without leaving Lucas exposed.

Since the Fulham game, where Gerrard played as the second holding midfielder in a 4-2-3-1, Kenny’s philosophy has been to allow Gerrard and Meireles the freedom to go forward without worrying too much about tracking back. Recent performances show that Gerrard and Meireles operate best when interchanging positions behind the lone striker. The key to their success is backing them up with either two holding midfielders (against Wolves) or a third central defender (Chelsea and Stoke).

For the second time this season against Chelsea, the star man was Lucas Leiva. If Lucas continually improves season on season as much as he has this year, it will not be long before he is being talked about in the same breath as the likes of Claude Makelele, Gennaro Gattuso and Sergio Busquets. His talent has been recognised by Brazil where he has been given the No 5 shirt made famous by Dunga, Mauro Silva and Cerezo.

After years of being a scapegoat, people are finally starting to see Lucas as he was seen by Benitez, but he has been on a tough journey to get his recognition. Coming into a Liverpool squad which contained Alonso, Gerrard, Mascherano and Sissoko had many fans scratching their head about why he was here in 2007. When he gave away a needless penalty and then got sent off in the derby at the beginning of 2009, he quickly became public enemy No.1 on the pitch.

Possibly his biggest crime was that he didn’t stand out. In many ways he still does not. He is not an all-guns-blazing midfield terrier like Mascherano, and he does not play those 50 yard inch-perfect passes like Alonso (Gerrard at his very best does both). This has inevitably led to questions being been raised about what Lucas actually does.

Makelele came in for similar criticism at Real Madrid. When he left, President Perez was quoted as saying, “We will not miss Makelele. His technique is average, he lacks the speed and skill to take the ball past opponents, and ninety percent of his distribution either goes backwards or sideways. He wasn’t a header of the ball and he rarely passed the ball more than three metres.” This quote could easily be a fans forum post about Lucas back in 2009.

It was 2010 when Lucas finally started to get recognised. The Mascherano brand of hard tackling midfielder is being stamped out across the game, illustrated by the fact that “Mascha” had the Premier League’s worst disciplinary record last season with seven yellow cards and two red.

In the modern day game “intercepting” is the new tackling. When you intercept you stay on your feet and there is no risk of a foul or booking. Intercepting a pass gives the best possible opportunity for launching a counter attack. Fortunately for Liverpool, interception is one of Lucas’ specialities.

Against Chelsea, Liverpool made 26 interceptions and Lucas was responsible for 5 of them, 20% of the team’s total. His pass completion rate of 89% is made even more impressive by the fact that, of his 45 passes, 30 were forward balls. This proves that he is not the “90% back or sideways” passer he has been accused of being.

Whether we continue with the 3-5-2 formation or revert to 4-2-3-1, Lucas will be as pivotal a player for us as Busquets is for Barcelona. Whilst one of the attacking players will always get the man of the match from Sky Sports, or the Alan Shearer treatment on MOTD, it will be Lucas who acts as the fulcrum of the team, marshalling the defence and stopping attacks before they have a chance to start.

Here is what I believe will be Kenny’s first choice 11 once everybody is fit, with Lucas absolutely vital to the team’s success: 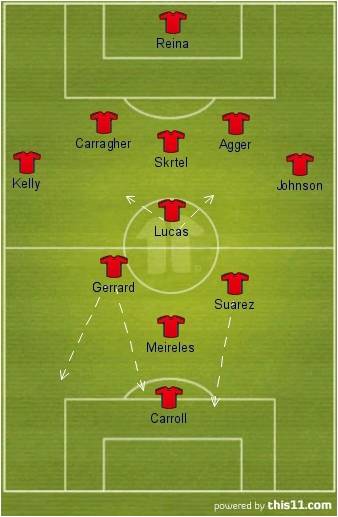 (With thanks to @AnfieldIndex for the stats).