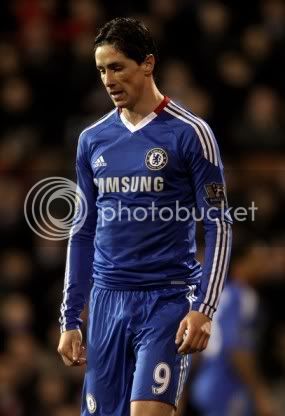 Failed to maintain 4th place
After making his dream move to Chelsea, Torres was starting last night against Fulham at Craven Cottage. Yet still no debut goal and even worse, they didn’t get all 3 points to match Tottenham in 4th place. With this draw, I believe Chelsea title chance is going from bad to worse to impossible, from 10% title chance after last week losing against Liverpool to 0% draw last night. I don’t know if I say this to soon, but now it’s all down to the battle of 4th place.

note : If there’s anyone watching the game last night, Chelsea fans are so disgusting singing Torres song made by Reds fans. “you’ll never walk alone” is still in the song and “chelsea’s number 9” in the end.

1 on 1
It is now a personal turn around between Liverpool and Chelsea. 1st thing 1st, is take over Chelsea position, after they failed to make a distance. We still have 11 matches left to catch up Spurs in 4th place. If we can win against United at home, Arsenal at their home, and Spurs at home, it will be a massive 9 points lift for us. But for me, the most important thing is, to finish the season above Chelsea, and that will make Torres regrets his move so badly.

Personal Thoughts
Perhaps some readers will agree and some might have a different thoughts. But the disappointments of Torres leaving Liverpool is still there. I’m not trying to forget him and move on. Yes he made his decision and he’s no longer wanted to play in Liverpool, but moving to rival team at such a wrong time is still unacceptable. That makes me want him to pay for his move and let him know that Liverpool is much better team now.

I’m glad that Stevie G said that he’s disappointed and gutted and heartbroken. Torres should apologize to Liverpool and to the fans who has been so supportive to him. And I’m not blaming Roy Hodgson who could be one of the reason that makes Torres didn’t happy during his time as Liverpool manager. And we all have experience that when we down to make a choice, there’s always something that bothers us to make a move. And for Torres that something is the arrival of Kenny Dalglish. Should he move or should he be a part of Liverpool Revolution under king Kenny, and he made the wrong choice. Finish the season above Chelsea is what I want, and I believe what all the fans also want.

20 responses to “Chelsea Out of Top 4 and Torres Regrets”