At a time when globalization is also entering the world of football, we Liverpool supporters, are a few of the supporters in the world that has been lucky enough to see two global players remain in the team and be loyal to us. This article is about one of them.

This is probably not the first tribute to one of our best players of all time. But I would say that it is among those most honest.

When I started to follow Liverpool FC, as a little 9 year old girl, not knowing how much greater and bigger Liverpool FC really was. One of the front figures already back then, was Steven Gerrard. He was the one I idolized and looked up to. I’m sure we all had that one player in our lives, whether their name is Dalglish, Fowler and Owen. You older folks, you have seen your childhood idols saddled on, become trainers, others forged a career in Australian football, others became Judas to us.

One of the greatest English midfielders in history. Has made himself a legend at Anfield. He has shown us he is a real leader, tireless runner, whole-hearted, powerful, incisive, faithful, crucial,

He has several times shown that he is one of us, celebrating the goal in stands as if he were an ordinary fan. He has helped us when we could not turn to anyone else and proved more than any other player that Liverpool Football Club is more than a club – we are one family. Which stand up for each through thick and thin. He is Red, through and through, just like you who read this article right now. 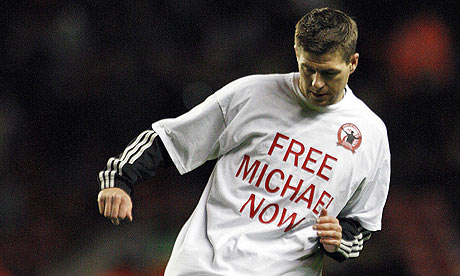 Oh how I wish that was true. I have not seen 40 yards ball all season it feels like. How much it strives to say it, how much I wish I was not knowledgeable enough about football to see it, I have recently seen how the quality of his game has fallen, drastically in recent months. And here I am, completely destitute, and wonder if that player I have followed since day one I started to watch football, in the near future puts the soccer shoes on the shelf.

I’m too young to have seen my childhood idol fall. Am I about too? Many claims that. Because every time I just happen to glance at the statistics on Gerrard, I have not been able to see past it. Recently, both statistics, football experts and match appearances has spoken against Steven Gerrard.

Now, many people believe that his golden days are over, and that he simply does not hold the standard to play in Liverpool. I do not believe in it. I’ll be realistic and say that yes, Gerrard has probably reached his peak in terms of form, he did that a couple of years ago. But still he has proven to us, day in and day out, that he still have what it takes to bring something to the team.

Memories that are pretty fresh in my mind is how important Gerrard was during Hodgson’s time. Gerrard was basically doing everything and pulling the team up by the bootstrings, taking the corner and having the desire to head it in too. It was his leadership that made the team at all cost, find the light at the end of the mile-long tunnel.

I read an article the other day by a well-known Liverpool supporter who is first and foremost a journalist, who described that we need to “take off our Liverpool glasses” and face the fact – Gerrard is done.

I must admit one thing, he has in recent times had a small form dip. But that is precisely what that is. One form dip. He is only 30 years old. We put that in a larger perspective, and we shall see that similar players have not submitted Frank Lampard, 32, remains a key player in Chelsea. Paul Scholes, yep, believe it or not, the man is still alive, is now 36 years old and still active in Manchester United.

The fact that Steven Gerrard could be out now, is unlikely. We just have to realize, that our Captain Fantastic can not do everything now. He can not be both the game engine, scorer and defensive structure. I am not suggesting that we should expect less from him on the pitch, but I suggest only that his role out on the grass could be changing. That is what defines a great player. Remove one of his many qualities, and he can still perform at a high level. For no one can ever bring down one of Stevie’s most sensitive characteristics that many footballers today do not have – a sense of the game.

I still can not deny that I think players like Steven Gerra these days are unusual, all-around players that also sacrifices themselves for the team. We have been incredibly lucky to have seen him in the red shirt for this many years, and take my word for it, we will continue to do so. At least until Stevie could retire and have the right to say; I have won the Premiership.

Although my cheeks are not as adorable as a young Steven Gerrard’s, I’m still nice to follow on twitter @Nezik_Keshto

Oh and one more thing, would be embarrassing if I had forgot.

Pride. It’s not a multi-million pound import from Brazil, it’s not even a load of super-cars sitting in the club car park. It’s good honest passion, enthusiasm and desire, all channeled in one direction. Your club. Your people. Your town. Your spirit.

So thanks, and congratulation Liverpool Football club, for spreading  unity, prosperity and a sense of belonging for 119 years.