It may surprise some people to hear that prior to the West Brom game, with just one exception, Andy Carroll has been on the pitch every time Luis Suarez has scored this season. Another remarkable stat is that they have only started 10 games together in 10 months. Their time together on the pitch has therefore been both fruitful and brief.

A lot of people have a misunderstanding about Carroll’s role for Liverpool. Many assume that he plays further forward than Suarez, like a classic No.9, waiting in the box for a cross to put his head on. In reality, however, Carroll is more deep-lying. This role is well suited to Carroll’s attributes: tall, powerful and awkward. Put simply, he is a nuisance to the opposition defenders. When Carroll takes up this deep position he forces defenders to make decisions, dragging them out of their comfort zone and creating the space for Suarez and the supporting midfielders to exploit.

A comparison of the heat maps for Suarez and Carroll during the West Brom game shows clearly the different positions they take up during a game: 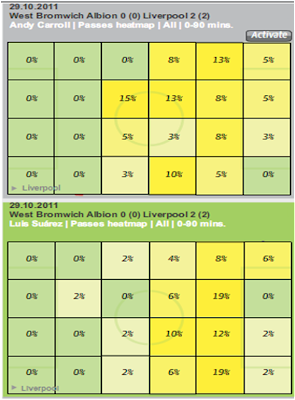 Carroll spent 36% of the game in and around the centre circle, and 26% of the game down the left flank. Two thirds of the game spent outside of the danger zone, being a nuisance. Suarez was more advanced, spending 50% of his time roaming around the right hand edge of the box, dragging one defender right whilst Carroll dragged the other left. This is highlighted from the heat maps of Olsson and McAuley, the West Brom central defenders: 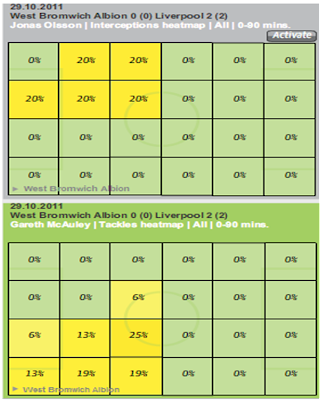 Carroll’s goal on the stroke at half time was a by-product of a stretched, and out of position, West Brom defence. A goal down and chasing the game, West Brom came forward, with Olsson playing the ball forward from midfield and McAuley at least 15 yards out of position: 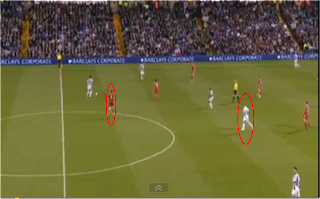 When the West Brom move breaks down, Lucas plays a sublime one touch pass to Suarez. Importantly, Suarez moves from his position near the centre circle to a position closer to the touch line: 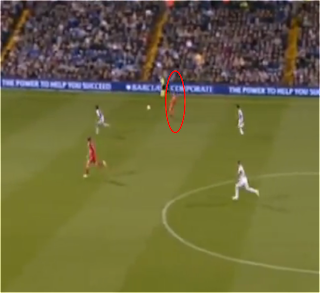 This movement from Suarez takes full advantage of the poor positional play from McAuley, leaving Olsson in no man’s land between the two strikers. The inch perfect pass from Suarez, combined with Carroll’s intelligent movement away from Olsson towards the edge of the area, left Carroll all the time in the world to slot home Liverpool’s second: 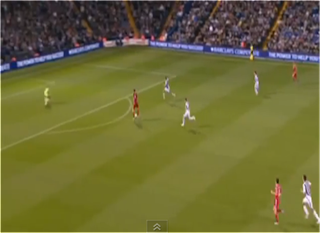 There is no doubt that McAuley’s poor positional play left a lot of space for the strikers to exploit. However, given the recent criticism about Liverpool’s ability to convert chances, it was a huge relief to see such clinical execution.

Carroll and Suarez were responsible for 11 out of Liverpool’s 16 shots during the game. Against Norwich, with Carroll on the bench, Suarez had by far most shots in the team. Against West Brom, Carroll had 7 shots on goal, almost double Suarez’s total. This clearly shows a sharing of the striking responsibility, in contrast to the game against Norwich where Suarez was a lone ranger. Carroll’s 7 shots are even more impressive when you revisit the stat from earlier: he spent two thirds of the game outside of the danger zone, making a nuisance of himself.

West Brom never really got started as an attacking threat during the game. Again, Suarez and Carroll can take a great deal of credit for this. They are both excellent at defending from the front, harrying defenders and stopping moves before they start. Of the 86 possession duels contested on the pitch, Liverpool’s two attackers were involved in 35 of them (Suarez 12 Carroll 23). To put these numbers into context, Lucas was only involved in 10 possession duels in the entire game. As ever, Carroll was a menace in the air, competing in 18 out of Liverpool’s 29 Aerial Duals. All in all, Carroll’s contribution against West Brom was fantastic and he got the goal his display deserved. 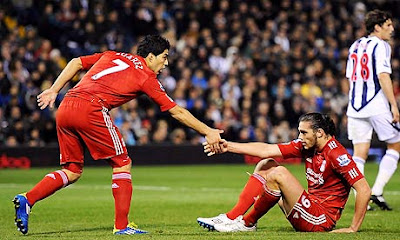 The stats from the West Brom game point to a partnership developing between Liverpool’s two strikers which promises to blossom into the deadliest in the league. Suarez and Carroll have complimentary styles which, on paper, have always looked compatible. One thing they have not had, as of yet, is a run of games together. The performance against West Brom strongly suggests that they are going to be seeing a lot more of each other as the season progresses.