Liverpool take on Fulham at Anfield on Saturday afternoon: a fixture which the Reds won 4-0 last season on our way to a double over Martin Jol’s men. We haven’t had it all our own way against the Cottagers in recent years though, as they have escaped with three clean sheets in their last five visits to Anfield. To flip the coin, though, Liverpool have conceded a meagre three goals in 12 home Premier League matches against Fulham.

Despite these statistics suggesting a lack of goals, I’ve got a feeling this could change on Saturday, if the Londoners’ recent, hopelessly sorry defending is anything to go by.

After a solid start to the season, in which we conceded no goals in each of our first three Premier League games, Liverpool have gone seven matches without a clean sheet. This run has, perhaps significantly, coincided with a switch in shape to three at the back by Brendan Rodgers.

Saturday’s meeting with Fulham seems an ideal opportunity to put this sequence to an end, and on the face of it, the game could be seen as a relieving fixture, sandwiched in between a trip to the Emirates and a Merseyside derby at Goodison Park. Three points here is a must.

Despite a previous worry about the availability of Luis Suarez, because of a FIFA ruling whereby a player must meet with his international team at least four days in advance of a match, Uruguay have confirmed that the mercurial forward will be able to play for the Reds against Fulham. He will then fly to Turkey on Saturday evening for a training camp in Istanbul with his compatriots. Suarez’s presence will of course be a boost for us, but fears that Steven Gerrard could miss the game with a hip injury will counteract Brendan Rodgers’ mood.

The Reds’ captain picked up the injury in our defeat to Arsenal last weekend, and rumours are subsequently mounting that he could miss the Fulham game. I’ve noticed a lot of people suggesting that Gerrard’s absence could be some sort of blessing in disguise, but in my opinion, they couldn’t be more mistaken. The 33-year-old has played 2.5 key passes per game this season: the fourth most of any player in the Premier League and more than Messi, Ronaldo, Xavi, Iniesta, Isco, Pirlo, Vidal, Hamsik and Schweinsteiger in their respective leagues. But hey, why let factual statistics get in the way of an arbitrary opinion?

Fulham will arrive at Anfield, looking to avoid a fourth straight defeat in all competitions. In my opinion, manager Martin Jol’s days at the club are numbered; his team look disorganised and careless and rely too heavily on individuality.

My view is credited by the fact that the Cottagers have attempted just 8.3 shots per game this season: comfortably the least in the Premier League. That statistic highlights their lack of control in matches. 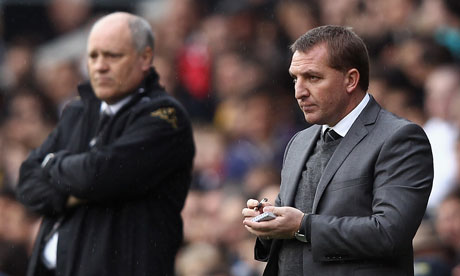 To add to Fulham’s woes, right-back Sascha Riether, whose performances have been a beacon of positivity at the club in the last 18 months, could miss Saturday’s game after being punished retrospectively by the FA for an unscrupulous stamp on Adnan Januzaj last weekend. The German looks set to be handed a three-match domestic ban, although this has not been confirmed yet.

Despite wrongly predicting a Liverpool win last Saturday against Arsenal, I am going to remain undeterred and can only see the Reds winning comfortably here.