Kolo Touré played for two English clubs prior to his move to Anfield, winning league titles and FA Cups with both…

On joining Liverpool he was an ideal replacement for the gap in experience left when Jamie Carragher retired, and whilst he wasn’t expected to be a first team regular, the club knew that Touré would bring spirit to the dressing room and guidance to Liverpool’s younger players.

During the first months of his Liverpool career, he emerged as much more than a back-up player. His performances led to suggestions that Liverpool’s first choice centre back pairing for the 2013/14 season would eventually consist of himself alongside the young, physical Frenchman, Mamadou Sakho. Martin Skrtel’s name had been touted around for a possible move, and Daniel Agger’s form was somewhere between world class and not fully fit.

Touré was so highly regarded that when he was stretchered off injured in a League Cup game against Notts County, there was a worry that the defence without him in it, would fall apart.

Since his return as a regular starter in 2014, Touré has been hit and miss, and occasionally a dangerous combination of both. His assist for West Brom’s Victor Anichebe, and a slice into his own net versus Fulham, will live long in the memory should Liverpool fail to achieve their goals in the league this season. In fact, his collision with Phil Dowd in the Fulham game, his ten second argument with Gerrard v Arsenal, his facial expressions, on field antics, and appearances in every Photoshopped LFC picture on the internet, will mean that we’re unlikely to forget his contributions, whatever happens come May.

However, to paint him as the clown in this crazy Liverpool circus is unfair. There aren’t many players in this team who want to win the league more than Touré, and this unfaltering conviction despite his own individual errors, will no doubt rub off on those players who aren’t quite as used to winning.

Does this look like a man who challenges for fourth? 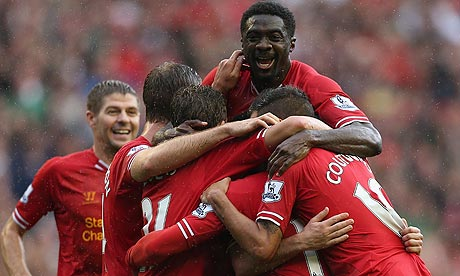 Brendan Rodgers has often commented on how much he craves winners in his team:

“In order to breed the consistency needed to give us success, we need to bring in winners – those with the winning mentality.”

In Kolo Touré he has someone who strives to win wars, even if he’s losing his own battle.