If recent reports in the Echo are to believed, Sevilla forward Carlos Bacca has become our top forward target this summer, with Aston Villa’s £32.5m rated Christian Benteke proving too expensive.

But who is Bacca, and if we agree to meet his mooted £21.5m release clause, what would he bring to Anfield?

Bacca is another of football’s late bloomers. Aged 19, Bacca was financing himself by working as a bus driver’s assistant alongside his deal with Atletico Junior, and it was only a loan spell at Baranquilla and then Minerven in Venezuela that saw him play first-team football. Eventually Bacca found himself selected for Atletico Junior however, and in three years from 2009 to 2011, he plundered 73 goals in 130 appearances. Aged 24, he finally earned a move to Europe, and Club Brugge were the beneficiaries. A brilliant campaign in 2012/13 in which he notched 28 goals saw Sevilla bring him to a major league, and the rest, as they say, is history. He’s now 28, and a double Europa League winner with Sevilla.

Bacca is an out and out centre-forward, and nothing else. While Daniel Sturridge likes to drift wide to collect possession and rumoured target Alexandre Lacazette is also comfortable on the left – Bacca does all his best work in the middle. He doesn’t drop deep in search of the ball, and can often go unnoticed until presented with chances. When he is, he’s usually lethal. Bacca is hard-working in terms of the runs he makes, but don’t expect him to track back or dive into tackles. In al almost old-fashioned manner, the South American does his best work in the penalty box, which should be not be considered detrimental. 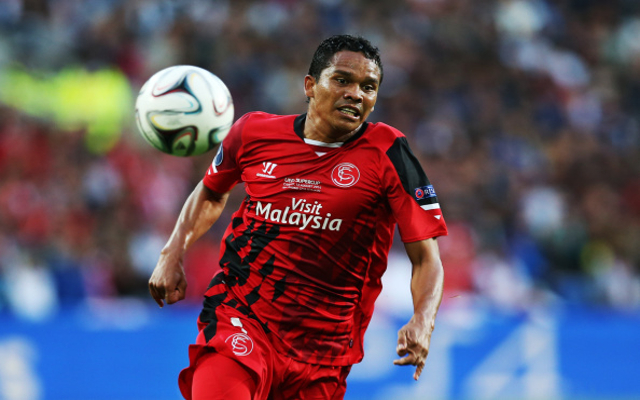