The Reds are busy preparing for their second pre-season game of the new campaign, which takes place on Friday morning against Brisbane Roar.

There should be plenty of confidence in the Liverpool camp, following a comprehensive 4-0 victory over the Thai All-Stars on Tuesday, but the A-League side should provide us with a much sterner test after finishing sixth in their division last season.

It’s always hard to predict the sort of team that Brendan Rodgers will choose to field in a match such as this but we can’t help but think that it would be nice to see our strongest possible side get at least 45 minutes together.

There are still plenty of absentees of course – with Roberto Firmino, Philippe Coutinho and Emre Can enjoying extended breaks after their international exploits and Daniel Sturridge injured – but this is the team that we would like to see take the field in our next game…

Adam Bogdan got the nod in Thailand, although in truth neither goalkeeper was sorely tested. Mignolet did look sharp in the second-half, making one good sprawling save, and probably deserves the start in this one.

Joe Gomez made his Liverpool debut in the first-half, but Clyne looked a class above after coming on at half-time. His powerful runs down the right hand-side were incredibly impressive and it’d be nice to see him do them in better weather!

The Slovakian was left out in favour of Kolo Toure in our first game and instead partnered Dejan Lovren during the second-half. All four players will have aspirations of starting against Stoke, but Skrtel remains our strongest and most reliable option. He needs to build up a strong working relationship with his partner.

Sakho was one of the standout player during the first-half against the All-Stars, scoring the second goal with a well-placed header. After two injury-hit campaigns at Anfield this has to be the season he pushes on and establishes himself as a regular in this team.

Andre Wisdom and Joe Maguire both got an opportunity in Thailand while the Spaniard was left out. With Jose Enrique having been left at home, it seems that Brendan Rodgers is searching for Moreno’s understudy. However, the youngster needs game time as well and should start here. 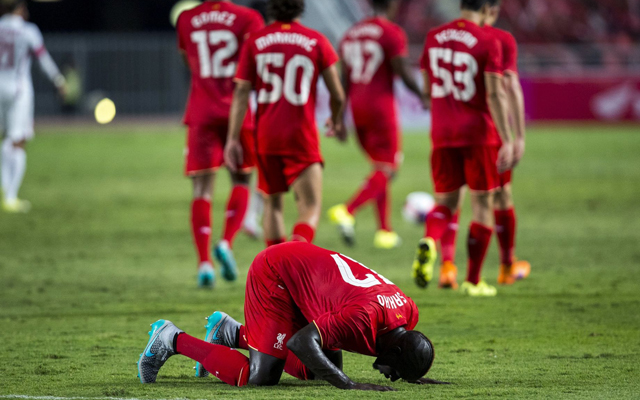