Steven Gerrard scored his first LA Galaxy goal on Friday night, helping his new team come from two goals down to beat the San Jose Earthquakes 5-2. Former Liverpool striker Robbie Keane was also among the scorers and was the first to congratulate our iconic ex-captain as he rolled back the years with an emphatic celebration.

You can watch it below…

The No. 8, who had already played twice for Galaxy ahead of his MLS debut, was clearly delighted to get his name on the scoresheet, as were the American commentators. They screamed with delight after their new hero found the net, no doubt leaving many Liverpool fans struggling to shake a somewhat surreal feeling.

Gerrard, who played more than 700 times for the Reds in all competitions before ending his 17-year stay in the first-team at the end of last season, also helped set up two further goals as Galaxy completed an incredible fightback.

SEE MORE:
Keep or sell – Rating the prospects of the eight Liverpool strikers, with Benteke set to join
James Milner talks team unity, new arrivals and turning on the style
Liverpool legend: Christian Benteke is worth MORE than £32.5m

His successor as Liverpool captain, Jordan Henderson, has also had a strong start to the season – impressing in both of our first two pre-season friendlies as we prepare for our season opener away to Stoke, the venue of Gerrard’s final Liverpool goal.

Thankfully, Gerrard still clearly remembers his routes, as you can see with the heartbreaking image below… 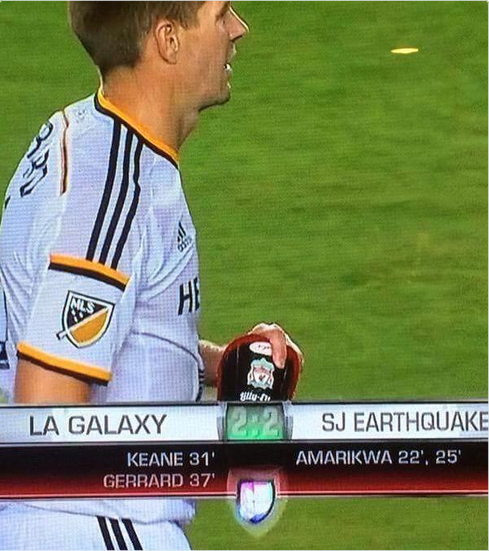