Two of our best players from last season, Coutinho and Emre Can, finally pulled on the New Balance strip in an Under-21 friendly against Porto on Sunday afternoon.

The Reds lost 2-0, but Under-21 boss Michael Beale was delighted to have the two stars with him during the Steel Park Cup fixture at Corby Town – and praised the pair heavily following their first-half show.

“It was fantastic to have Philippe and Emre with us and they did really well in the planned 45 minute outing,” he told Liverpool’s official website.

“Their attitude was absolutely fantastic and they were brilliant in the dressing room as well with our young lads.

“It was exciting for the supporters at Corby Town to see players of the calibre of Philippe and Emre in action, and I’ve been lucky to work with them in training this week.”

Coutinho had been allowed an extended break following his Copa America duties with Brazil, while Can played for Germany during the European Under-21 championships.

They, along with Roberto Firmino and Mario Balotelli, have been training at Melwood though while the rest of the squad partakes in the pre-season tour of the Far East and Australia.

Coutinho and Can will be in consideration for a starting spot on Premier League opening day, and it’ll now be important to reintegrate them into the returning group and make sure everyone is up to speed for the Stoke clash.

Despite the Under-21 defeat, Beale was happy with the performance of his side.

“Overall Porto were much older than us and are ahead of us in their physical preparation at this stage,” he added.

“The penalty was very harsh for the second goal and I think even the Porto players were quite surprised when it was given.

“I’ve been pleased with the players though this weekend. We have faced two tough games against very good opposition.

“We had the chances to have beaten PSV but just couldn’t find the winner, and again today we had some good openings but were guilty of trying to get the perfect goal.

“I’m very pleased with our work so far though and we face Chester’s first team on Wednesday before playing Morecambe’s first team next Saturday, so they will be two good tests for us.”

Can and Coutinho have a strong chance of competing in our next friendly, which is due to take place on August 1 against HJK.

The former is expected to play in midfield this term, while Coutinho will be battling Adam Lallana and Roberto Firmino for pivotal starting spots in attacking midfield. 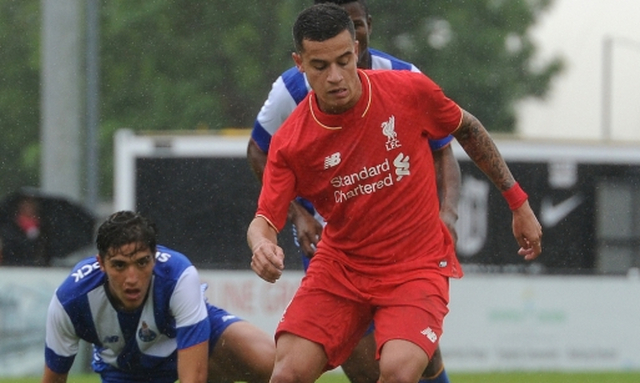