Liverpool CEO Ian Ayre thinks the improved main stand is going to boost not only the club, but the city as a whole.

The stadium expansion is expected to be ready for the 2016/7 season, and will increase the current capacity to 54,000.

Sky Sports are going around all 92 clubs today and speaking to various managers, owners, physios and players – and caught Ayre for a chat when they got to Anfield.

He was keen to explain how increased match-day revenue will help us financially, and why FSG elected to improve Anfield rather than relocate.

“The stadium is vital to the health of the club and we want to compete at the highest level,” Ayre told reporters, reported in the Echo.

“And if you look at revenue at clubs, match-day revenues are important, as well as the mix of commercial and media.

“If you look at Arsenal as an example, after building the Emirates, they generate around 40% of revenue on match day and we generate 20%.

“So this new stadium will get us back to that sort of level because we need to be on an equal level with our competitors.

“Since the new ownership group (Fenway Sports) came in, we took the decision to work hard to find the right solution.”

“It’s about finding something in keeping with this great stadium, keeps us at our spiritual home and delivers the sort of capacity which the fans and club deserve.

“It’s not just about the stadium. It’s also the regeneration of the whole area, the council, the housing group – a not-for-profit housing group in the area.

“And it was important to get a stadium design in keeping with the existing Anfield. As well as having excellent modern facilities, it will look like it’s always been part of this fantastic stadium.

“Staying here was so important. But also finding the right economic solution for the long term interest of the club and this does that.

“It gets us towards the capacity we want, and at a better cost than building a new stadium.”

The new designs for Anfield look superb, and it will be great when it’s finally complete after hearing about potential new stadiums and stands for much of the past decade.

Ayre makes a point in that cost-wise, a new ground would have made it very hard for us to compete at the top in coming seasons, much like Arsenal did upon first switching to the Emirates.

What’s more – Anfield IS our spiritual home – and playing football somewhere else would have felt bizarre.

Let’s hope he’s right, and that the completed stand increases revenue and helps us regain our rightful status as a a genuine European powerhouse. 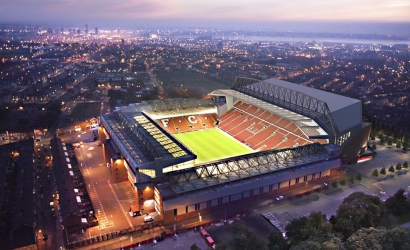