Christian Benteke opened his account for Liverpool tonight as Brendan Rodgers’ men made it two Premier League wins from two, having yet to concede a goal.

But while the result was good, the performance was occasionally disjointed, and Liverpool fans, while delighted with the three points, were asking questions come full-time.

Jordan Chamberlain – Editor of Empire of the Kop

Never flapped at crosses to pick up his 11th clean-sheet of the calendar year in the Premier League, more than any other goalkeeper. His most impressive asset is perhaps his ability to hold onto fizzing drives from various ranges, and he did that again tonight. Wouldn’t have been blamed if Bournemouth’s goal wasn’t ruled out.

Clyne’s made a fantastic start to his Liverpool career, and he was our best player on the park tonight. Defensively, he’s an enormous improvement on Glen Johnson, but provides just as much energy and link up play down the right as his predecessor. The 24-year-old put in the perfect fullback’s performance, barely ever giving the ball away despite constant pressing from the newly promoted opposition. At £12m, he looks an enormous snip.

If Clyne was a bargain at £12m, Gomez the steal of the summer at £3.5m. To think, (and we’re going to say this a lot this season…) he’s only 18-years-old. The two main attributes that impress so much, both of which belie his age, are his physicality and his composure. He doesn’t fret when attackers close him down, he doesn’t get bullied, and he makes sound defensive decisions. If he carries on like this, he’s not going to lose his place at left-back for some time.

Another clean-sheet which the Slovakian certainly played his part in. Traditionally lucky not to give away a penalty when grappling at a corner, Skrtel was actually outshone by his partner tonight. Fans moan that Skrtel’s taking too big a risk by shirt pulling, but if he gets away with it, which he did, it’s good defending. Had a few shaky moments though. Is it implausible to see the stalwart dropped for Sakho, and not Lovren?

Skinned by Calum Wilson early on, but settled into the first-half, and the odd lapse in communication/concentration didn’t result in a chance for the Cherries. As the game wore on though, Lovren got defensively better and better, and as the visitors pushed, he was an impressive last line of defence – winning plenty of headers and making a few tackles, too. His performance wouldn’t have entirely silenced those who want Mamadou Sakho starting ahead of him, but it would have gone some way to suggest he’s not the liability of 2014/15. 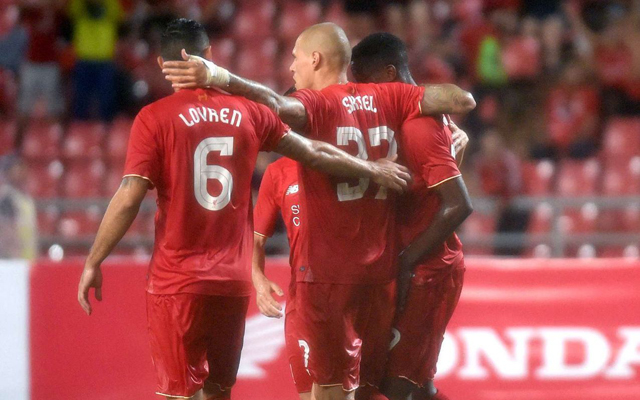