It will be very tempting for Brendan Rodgers to avoid change against Arsenal. After wins over Stoke City and Bournemouth, which have both come using the same formation and the same starting line-up, you could perhaps forgive the boss for sticking with his 4-2-3-1 formula in North London.

However, as we consider the areas in which we fell short against Bournemouth last time out – when, especially early on, we were a little overwhelmed in midfield by our newly promoted rivals – then we can see the value in changing to a slightly more traditional 4-3-3 set-up.

Jordan Henderson’s potential injury issues could also force Rodgers’ hand. Our captain limped out of the game against Bournemouth shortly after half-time and, as a result, he may not be risked at the Emirates Stadium.

Gomez has been excellent thus far and will likely keep his place for the Arsenal game. However, Moreno has at least given the boss food for thought ahead of the match, after an encouraging cameo in a more attacking role against Bournemouth.

There are two things that could work in the Spaniard’s favour here – the first being that Rodgers could elects to go for the more experienced member of his squad in such a big game, and the second being that we could yet play both of them, with Moreno starting ahead of Gomez to give us that extra little bit of solidity on the flanks. 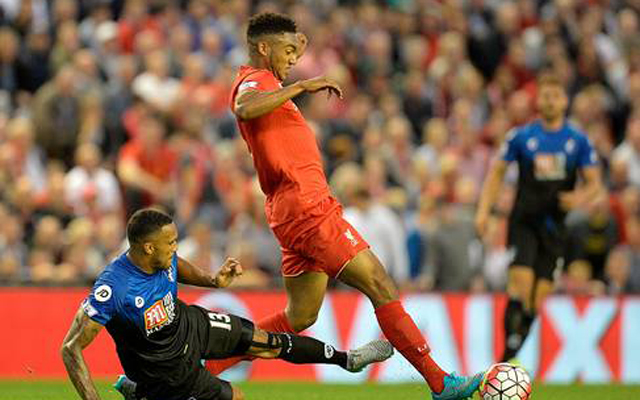