It’s obviously important to note that we’re not yet in November and Jurgen Klopp has far more necessary things to concentrate on than future transfers, such as Saturday’s Premier League clash with Tottenham.

But as the tabloids churn out Robert Lewandowski and Marco Reus rumours, we’ve checked the Bundesliga to highlight five more realistic players who’d help Liverpool, due to their positions and styles, should we target them either in January or next summer.

Klopp’s said he won’t be poaching any of his old Dortmund players right away (via Daily Mail), but he’d be mad not to consider the superb German if he changed his mind. Gundogan recently posted a really complimentary message about Liverpool and his former boss to Facebook (see below), and according to the Metro and various other sources is a top target. We take their claims with an enormous pinch of salt, but see no reason why we couldn’t tempt the 24-year-old if we really wanted to. The lure of a huge contract and Klopp would likely be too much for any of his Dortmund favourites to ignore – provided we finish in the top four this term… 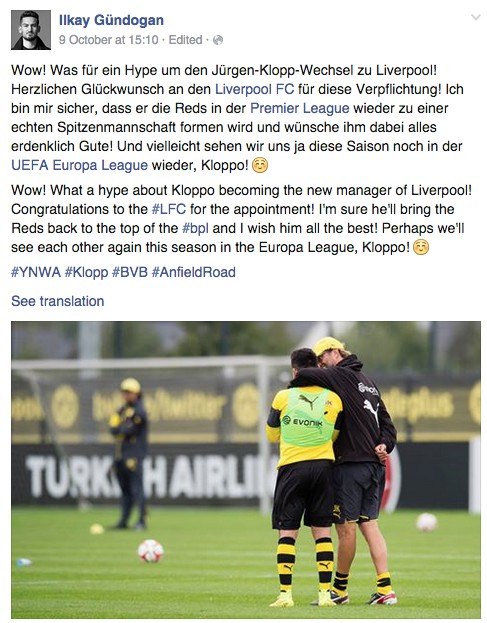