Jurgen Klopp has so far had to select his Liverpool starting XIs from a largely injured squad. Skipper Jordan Henderson and star forward Daniel Sturridge only played their first minutes under him during the victory over Swansea – but both are now fit and ready to get back up and running.

Danny Ings and Joe Gomez remain season long absentees, while Mamadou Sakho is out until Christmas. Jordan Rossiter and Jon Flanagan are back in training, while Jose Enrique is playing Under-21 matches to build up fitness.

With all that in mind, here’s Liverpool’s potentially strongest XI from now until Christmas in our mind, provided nobody else picks up debilitating injuries.

Have we got it right, Reds?

Check out the very, very impressive bench, as well…

Will remain no.1 provided there’s no more bloopers.

Hopefully Flanagan can return to fitness and allow Clyne the odd break.

A new left-back to support Moreno is likely needed in January.

Good under Klopp. Long may it continue.

With Sakho injured for December, Lovren knows he has a prolonged run. Surely the Frenchman must return when he’s fit, however.

Definitely deserves a starting spot following his excellent contributions this season. Crucial at anchorman. A real Klopp favourite, too.

Superb in central midfield in our past two Premier League matches, silencing some of his doubters. Provides industry and physicality but is increasing in class as well.

Captain Henderson should come in for Milner, who despite his penalties, hasn’t done enough top suggest he’ll keep the skipper out of the side – or remove Emre Can from it either.

Thrived when deployed close to Coutinho. He needs to play in a dynamic front-three near his Brazilian counterpart, as he did against Manchester City. His performance during this game is why we’re selecting him over goal shy Adam Lallana.

Thankfully his hamstring problem wasn’t serious. Our best player and creative genius has been on fire under Klopp.

When he’s fit, he simply has to start. Provides goals and pace, and the thought of Sturridge and Firmino supplying him just behind is frightening.

Such a strong bench when everybody’s fit. Benteke provides Plan B, Ibe provides pace and width, and Milner and Allen shore up the middle. 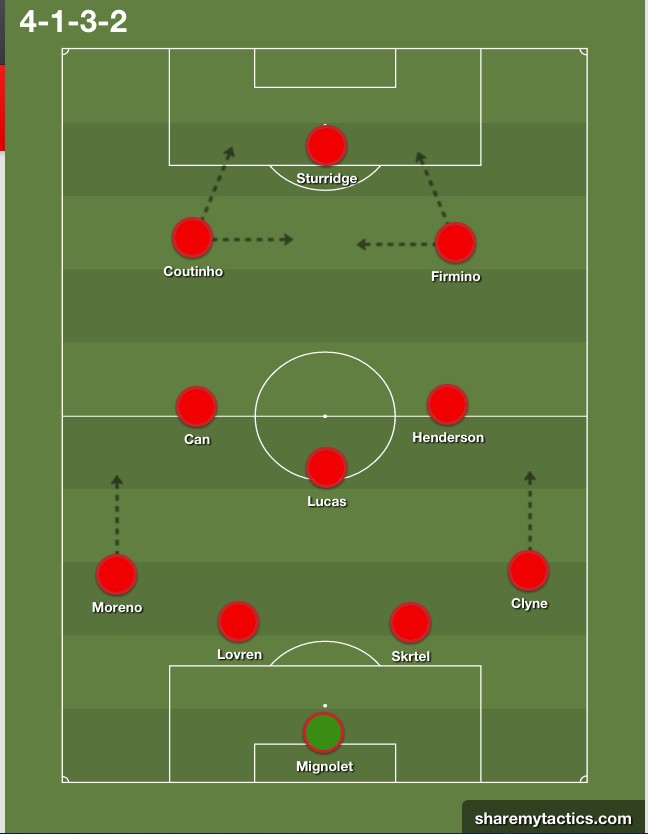