Jurgen Klopp hinted during his pre-Newcastle press conference on Friday that he could select the same team which defeated Southampton 6-1, but with Emre Can suspended, we know this cannot be the case!

He also suggested Daniel Sturridge and Jordan Henderson are fit and raring to go, but claimed that Liverpool were overly optimistic on Coutinho’s return date, via the Echo.

“In this moment he [Sturridge] is available for the weekend. Hendo has made a big step in the last two weeks, and that’s the best news. He feels good. But with Phil we were too optimistic. He trained nearly normally, but he doesn’t feel comfortable. We have to be careful with the muscle. We will wait, I can wait, until he is available.”

With this in mind, we actually think Klopp will make six changes.

Simon Mignolet will surely come in between the sticks, while Nathaniel Clyne is a certainty to come back in for youngster Connor Randall.

The rest of the back four will stay the same, with Martin Skrtel and Dejan Lovren in the middle and marauding Spaniard Alberto Moreno on the left.

Lucas is an automatic starter at anchorman, but we reckon Jordan Henderson and James Milner will replace suspended Emre Can and Joe Allen either side.

There’s three spaces left up top, and with Coutinho out, two of them must surely go to the players that scored five goals between them on Wednesday – Sturridge and Divock Origi. This means Christian Benteke might stay on the bench.

Jordon Ibe, Roberto Firmino and Adam Lallana could take the final spot, but for us, it’ll be Lallana – who’s clearly a Klopp favourite due to his running and work-rate.

We’re speculating that Ibe, Firmino and Benteke will stay on the bench, ready to stretch Newcastle if we’re winning or pressure them if we’re behind. 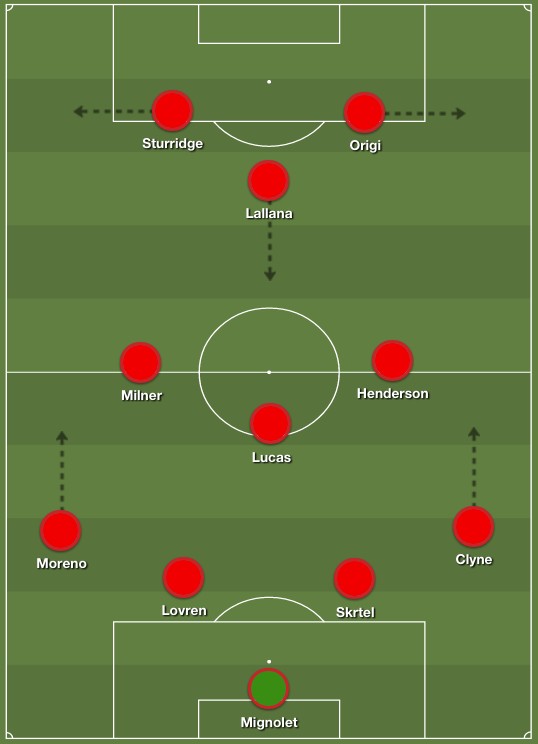