We were one of the first outlets to jump on Serbian newspaper Mondo’s report that Liverpool had finalised a deal with Red Star Belgrade midfielder Marko Grujic, and thankfully, the player has now all but confirmed the switch.

The 19-year-old looks set to complete a £4.3m transfer in January but will be loaned back to his parent club until the summer.

Last night, Grujic shared an article about the move to his Facebook page, along with two ‘smileys’. The article is by the Serbian Telegraf, and translates as:

“Marko Grujic has agreed to all the conditions with Liverpool and should soon be formalised and that his transfer to the club from Anfield . The euphoria among supporters of red has already begun due to the arrival of one of the most talented players in Europe.” 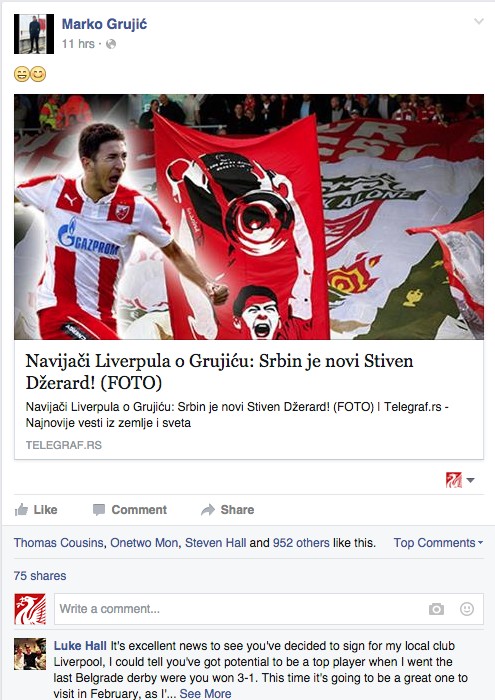 These Serbian comparisons to Steven Gerrard are obviously monstrously premature, but are born from the player’s characteristics and attributes.

Grujic wears no.8, shoots from range, enters the box late and is physical beyond his years, although his successes have so far been in the Serbian league – a far cry from Gerrard’s achievements as a young man in the Premier League.

Still, you can see by Grujic’s highlights that he’s seriously talented, and we cannot wait to see him strut his stuff at Anfield. Rafa Benitez’s first signing was Josemi and Brendan Rodgers’ was Fabio Borini – let’s hope Grujic betters those two!