It appears the constant online criticism from some Liverpool supporters has got too much for Simon Mignolet.

Our Belgian no.1 shared a post today via his Facebook, which congratulated him for racking up the most clean-sheets in 2015 of any Premier League goalkeeper.

But as usual, a fan questioned his ability – asking Mignolet to up his consistency.

SEE MORE:
Editor’s column: ‘If Adam Lallana was a horse…’

In fairness, the comment from Facebook user Tally B Ndzabalomuhle was nowhere near as confrontational or as critical as many replies Mignolet will have received this term – but he felt the need to personally respond:

“You talk about consistency? Having the most clean sheets in PL this year is showing consistency! Nobody is perfect people should stop talking about the negative points and show more support…” 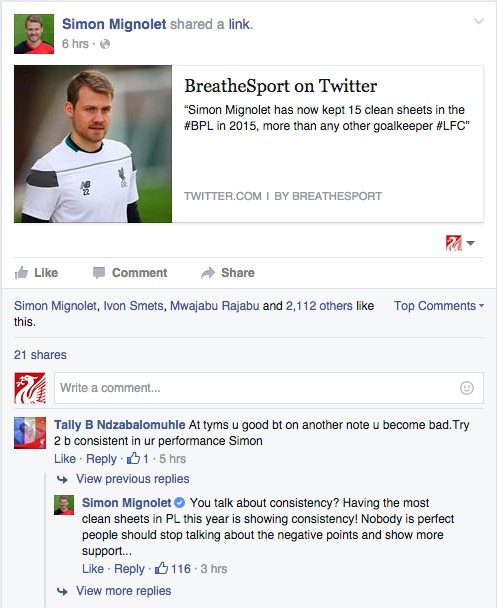 Mignolet’s response is another example that footballers obviously do read and pay attention to social media.

In our opinion, we think Mignolet and ‘Tally’ both have valid points! Yes, the clean-sheet record deserves support and congratulations (even if Mignolet is giving to to himself)!

But the supporter makes a point too. Consistency means he has to cut the mistakes out of his game, because they’ve so far proved detrimental to our season..

Most importantly though, Jurgen Klopp has openly backed Mignolet, which means we should as well. The Guardian reported earlier in the month that the 27-year-old was on the verge of signing a new contract.