Marko Grujic’s imminent transfer to Liverpool is one of the worst kept secrets of the season, especially as the player himself keeps talking about the move via his Facebook page.

Yesterday, the 19-year-old Serbian shared this article – confirming that the medical and move will be completed tomorrow – January 4th. 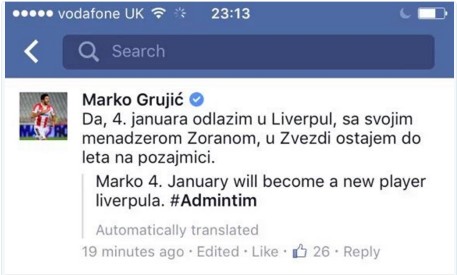 As has been publicised on multiple occasions, the Red Star Belgrade midfielder will head back to his parent club on loan for the rest of the season – before coming to Liverpool properly in the summer.

In this respect, the deal is very similar to the one which brought Divock Origi to Melwood via a loan spell at Lille.

Earlier this week, Red Star published a statement explaining why they decided to cash in on their starlet, reported here in the Daily Star:

“All in Red Star sincerely want Marko Grujic to stay for the next 10 years, but the financial situation of our club dictates the adoption of a different decision.

“The board considered the offer and unanimously accepted the offer of the English giants.

“Liverpool will pay the money immediately, and the player will stay in Red Star until 01/07/2016.

“We wanted to respect the desire of the player’s father Marko Grujic remain until next summer at our club and we agreed to pay Liverpool €1m (£750,000) for the loan of six months.”

Grujic has played a pivotal part of Red Star’s Serbian title charge this term, scoring five goals in 21 appearances for the leaders.

He’s a dynamic box-to-box midfielder, and in truth, we could’ve done with having him available immediately – considering our lack of central midfield options at this point and the number of matches we’ve coming up.