We’ve reached the semi-finals of the League Cup, meaning if Jurgen Klopp can navigate two legs versus Stoke, he’ll have a pop at his first trophy – against Manchester City or hopefully Everton February’s Wembley final.

Because of where we are in the competition, the League Cup should take priority over the FA Cup, which we should be able to navigate versus Exeter City regardless of which side takes the field.

The only players who could be considered ‘first-teamers’, who didn’t start versus West Ham are Joe Allen and Adam Lallana, and for this reason we think the pair will come into the side.

If we’re right, Klopp will stick with the same back-five that largely let themselves down at Upton Park, with Simon Mignolet, Nathaniel Clyne, Alberto Moreno, Dejan Lovren and Mamadou Sakho starting. Moreno was withdrawn after the hour against West Ham in order to keep him fresh, and we think the young fullbacks Connor Randall and Brad Smith will come in for Friday’s tie with Exeter.

Lucas was poor on Saturday meaning we think Allen will replace him and start alongside Emre Can in the midfield duo.

The attacking midfield could see one change, with Adam Lallana replacing Roberto Firmino – who looked tired. This means Jordon Ibe and Coutinho could retain their positions – although expect Lallana to start wide – enabling Coutinho the pivotal no.10 spot he craves.

Up top, Christian Benteke is the only real option, unless Klopp wants to use Firmino as a false-9 – which actually is a possibility considering the Belgian’s stinker last time out. But we think Benteke needs another chance to redeem itself, and the League Cup provides a good opportunity for him to get back on track. 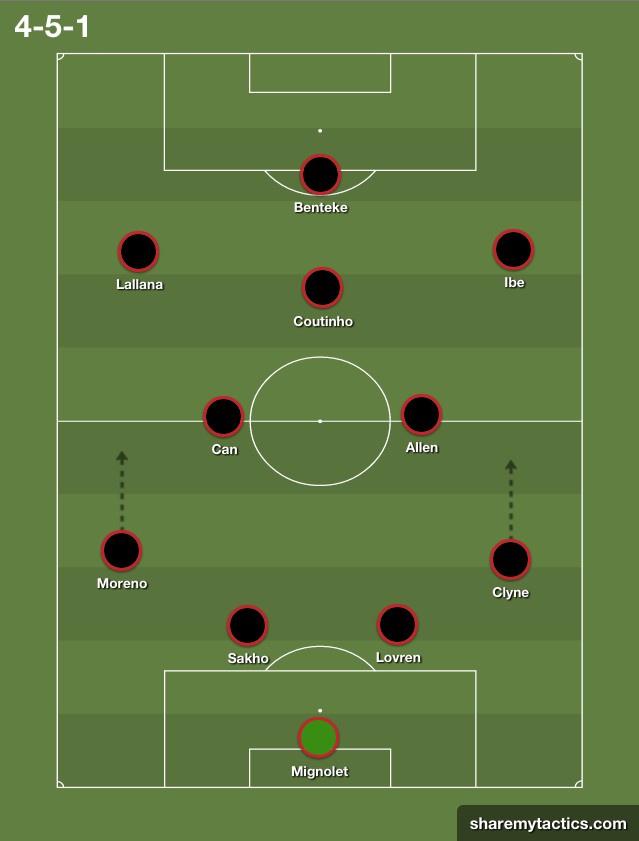