Liverpool next come up against Arsenal on Wednesday 13th, and with his squad suffering the worst injury crisis in living memory, many of Jurgen Klopp’s selections pick themselves.

At the back, the regular goalkeeper and the fullbacks are thankfully fit, and will start barring a training injury (perish the thought…) This means Simon Mignolet, Nathaniel Clyne and Alberto Moreno are practical certainties.

Central defence is little trickier, of course. Martin Skrtel and Joe Gomez remain long-term absentees, while Sky Sports don’t think Mamadou Sakho or Dejan Lovren will be back ready in time. Thankfully Kolo Toure‘s problems at the end of the League Cup win over Stoke were more cramp than anything else – meaning he could line up alongside Lucas – who did well in defence at the Britannia.

We may have a new centre-back signing by then, but we’d feel safer with Lucas in all honesty.

Joe Allen was our Man of the Match v Stoke and deserves another start, with Emre Can and James Milner the natural selections ether side of him. Captain Jordan Henderson’s heel problem is proving more troublesome than first anticipated.

Up top, the injury problems are even more prominent. Coutinho is out until mid-February, while Daniel Sturridge and Divock Origi won’t be ready either. Jordon Ibe does have a hamstring problem, but the Echo claim it isn’t serious and he could be in contention for Arsenal.

Because Christian Benteke started v Exeter and played so awfully, we think Ibe will be available – as Klopp surely wouldn’t have played Benteke the full 90 if he were definitely needed against the table-toppers.

This means Adam Lallana can take the other attacking midfield spot, with Roberto Firmino starting up front.

If Ibe isn’t fit, Benteke will start up front with Firmino and Lallana behind.

The bench will be full of the youngsters who drew with Exeter.

Thoughts on this potential side, Reds? 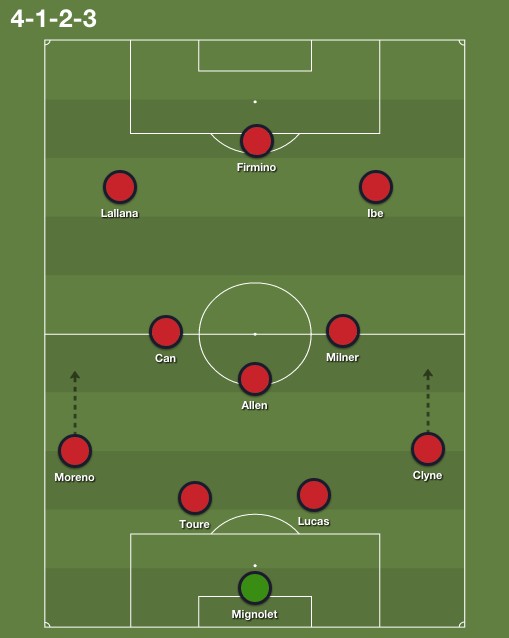