We reckon Jurgen Klopp will make only one change from the side that drew with Arsenal on Wednesday evening for the crunch clash with Manchester United this Sunday.

And that will be bringing late goalscorer Joe Allen in for Jordon Ibe, who had a very unproductive game.

At the back, Simon Mignolet obviously starts between the sticks, and with Dejan Lovren not ready to return, Mamadou Sakho and Kolo Toure should stay together at the back – unless Klopp wants to bring Steven Caulker in for the latter… We’d assume it’s more likely Caulker plays in the League Cup and FA Cup fixtures though. Danny Ward is likely to keep his spot on the bench ahead of Adam Bogdan after taking the backup position for the Arsenal game following Bogdan’s FA Cup blunder.

In midfield, Emre Can is likely to start as anchorman ahead of Lucas, who like Caulker – will be primed for the cup fixtures after being left out recently.

In-form Allen deserves a start and we think he’ll get one, alongside the young German and skipper Jordan Henderson in a midfield three.

The Brazilian bagged two against Arsenal, and will surely get the nod again with the static Christian Benteke on the bench.

Allen will add fluency and passing ability to the midfield, which Ibe sadly did not the other night. This means we could be relying on Milner and Lallana to supply Firmino – who can hopefully continue his recent form in front of goal.

With Daniel Sturridge still out injured, he remains the most viable option. 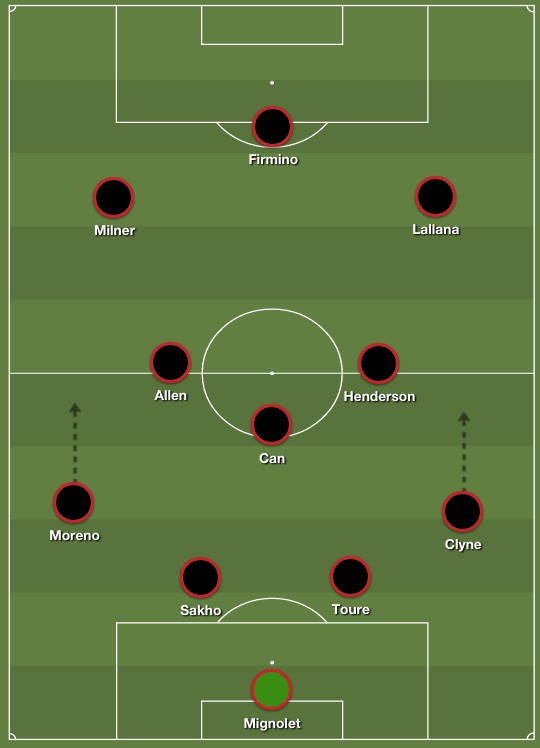