Goal, a publication we find very hit and miss, has called upon ‘the expertise of 37 editions across the globe’ and named the Top 50 Under-18 players in the world right now.

And Liverpool’s Joe Gomez has been rated at a very exciting no.10 – making him the highest English player and the highest Premier League based player as well.

Ahead of him are players destined for genuine greatness such as Youri Tielemans, Gianluigi Donnarumma, Martin Odegaard and Ruben Neves.

Recognisable names such as Dominic Solanke,Patrick Roberts and Reece Oxford also feature – but all behind our wonderkid centre-back!

The tenth placing is another example of the talent Gomez holds. The teenager joined from Charlton this summer and impressed Brendan Rodgers and co. so much during pre-season that he played himself into the first-team for the beginning of the campaign – at left-back – ahead of Alberto Moreno.

He didn’t put a foot wrong until a cruel knee injury picked up with England Under-21s ruled him out for the majority of the season, but we’ll hopefully see him again in some capacity before the term’s end.

Gomez has the potential to develop into a starting centre-back for Liverpool and England, and Jurgen Klopp is the man to help him blossom.

We’re glad the defender’s getting this kind of recognition already.

But how many of the rest of this list have you heard of, folks? 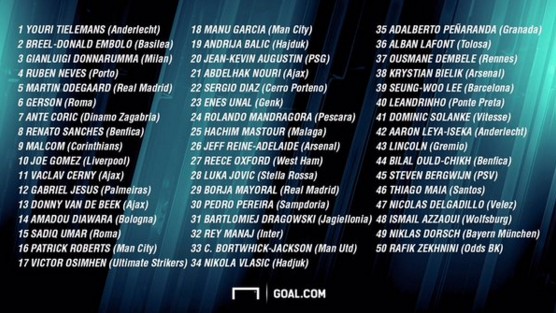