Ian Ayre and his team of delegates have returned to England without having finalised a deal for Alex Teixeira, the Guardian report.

Liverpool sent the officials over to Florida yesterday to thrash out a deal with Shakhtar’s representatives, with the Ukrainians currently enjoying a friendly tournament in Orlando.

Liverpool’s £24.6m bid was rebuffed with Shakhtar wanting £38m, say the Guardian, but thankfully – the Donbass Arena outfit are still willing to negotiate from now until the end of the January window. We have roughly one week to conclude a deal.

Dominic King in the Mail claims Shakhtar will actually do business for closer to £30m, which seems a reasonable and realistic price-tag – considering we spent more than that on Christian Benteke.

Simon Jones in a separate Mail article claims Liverpool hope to secure Teixeira’s work-permit based on a points system, as the 26-year-old has never actually been capped by Brazil – despite a record of 22 goals in 15 league games this term. Teixeira needs four points to qualify, which judging by this – should be a given: 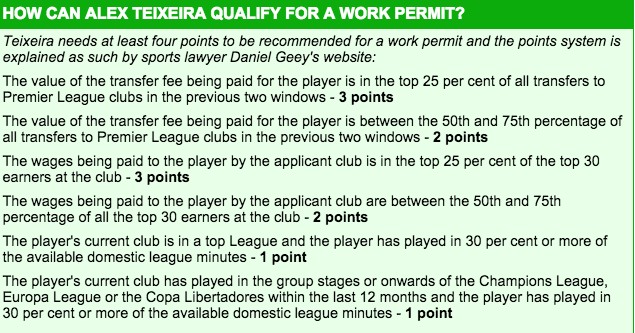 The attacking midfielder would inject goals, class and speed into our side – three things currently lacking.

He’s one of the top scorers in Europe so far this term, made all the more impressive because he doesn’t start up top.

Check out our in-depth analysis of the potential transfer, here.