Jurgen Klopp told yesterday’s press-conference that Adam Lallana was a doubt for the Norwich tie, via the Echo, meaning we think the trip to Carrow Road could be the first Premier League game under the German’s tenure that the playmaker’s not featured in.

At the back, Simon Mignolet will continue in goal after a hopefully confidence boosting clean-sheet against Exeter last time out, and he’ll likely have a more experienced back-four ahead of him verses Norwich.

That means Nathaniel Clyne at right-back, Alberto Moreno at left-back, and Mamadou Sakho partnering Kolo Toure at the heart of defence. Dejan Lovren and Martin Skrtel are not yet ready to return, and Toure will likely continue ahead of Steven Caulker – still waiting for his full debut.

Emre Can and Jordan Henderson are certainties to start in central midfield, and we’d bank on Lucas starting alongside them instead of Joe Allen who played most of the Exeter tie. Lucas was probably our best player against Manchester United, and should be fresh for the away trip to Alex Neil’s struggling side.

With Coutinho, Daniel Sturridge, Divock Origi and Lallana out, Klopp is likely to go with James Milner and Jordon Ibe on the flanks.

Up top, Roberto Firmino is improving week in, week out as a false-9 and deserves the opportunity to continue, with Christian Benteke forced to start from the bench again.

What do you think of this potential XI, Reds? 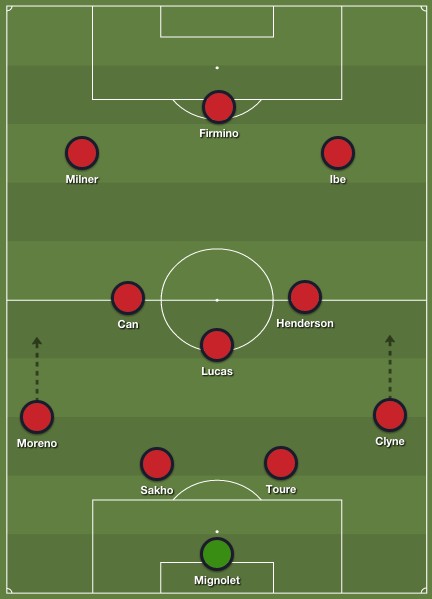