This story seemed a little vague at first this morning, but we’re paying attention to it as it’s straight from Sky Sports, a source trusted by Liverpool fans.

It claims that Alex Teixeira has told Shakhtar he wants to switch from the Ukraine to Merseyside, partly because he counts ‘compatriots Phillipe Coutinho and Lucas Leiva as two of his best friends in the game’.

The two clubs are yet to agree a fee, although a report in the Daily Star which cited Futbol Ukraine claims the player’s agreed a contract with Liverpool.

Teixeira started out at Vasco de Gama in Brazil, and although the attacking midfielder is three years older than Coutinho, they knew each other well from the youth set-up.

How the 26-year-old is acquainted with Lucas, someone he’s never played with at club or international level, is not known to us!

Teixeira’s behaviour on Instagram backs up the theory that our current force of Brazilians will aid his Liverpool move, with the player liking this picture below, which was captioned: ‘Our potential Brazilian force’. 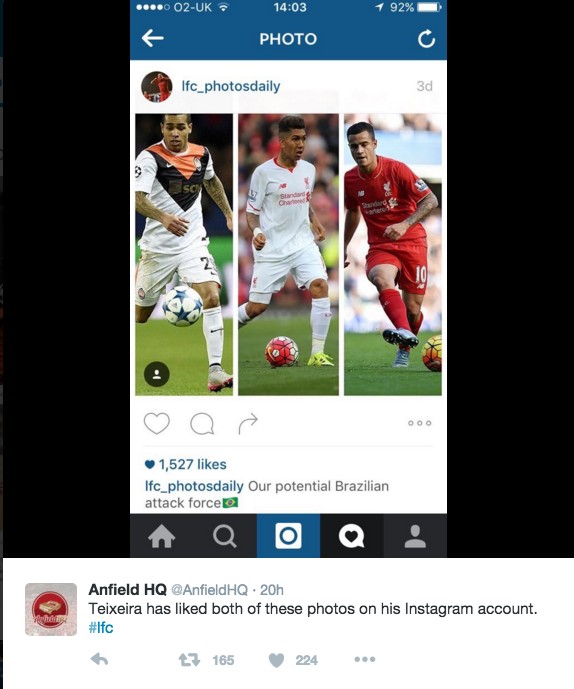 The thought of a fluid, Brazilian attacking trio at the top for Liverpool is pretty exciting. All are technically exceptional, skilful and possessed with vision and movement.

And importantly, Teixeira scores hatfuls of goals, with despite Firmino’s strong recent form, the other two have not managed to this season.