Considering that we have no FA Cup game to rest players for this weekend, one would hope that Jurgen Klopp sticks with the same side which so emphatically dispatched of Aston Villa 6-0 on Sunday when we travel to Augsburg for the first leg of our Europa League last-32 tie.

But there still may be some tinkering done by the Liverpool manager.

Simon Mignolet will definitely start in goal. He played throughout the group stage and this is not the right game to throw Danny Ward in at the deep end for a first-team debut.

The whole back five will likely be identical to the one at Villa Park, where we kept our first Premier League clean sheet of 2016. Jon Flanagan is probably desperate for a run out, but there is no reason not to play Nathaniel Clyne. Klopp should resist the temptation to rotate and instead play our strongest possible side in order to hopefully put us in a position to rest players for the second leg at Anfield in a week’s time, thus giving key men a breather ahead of the Capital One Cup final.

Martin Skrtel and Dejan Lovren missed the rout in the Midlands and are still not in contention. Kevin Stewart has not travelled because of an unfortunate ankle injury picked up in training, but Klopp has confirmed that Lucas Leiva is fit after a hamstring strain – via the official website.

Genuine holding midfielders of the Brazilian’s ilk are crucial in European football, and he may come in for Jordan Henderson, whose heel problem might still need managing. Emre Can and James Milner – standing in as captain for Henderson – can provide the legs in the middle of the park.

The front three worked so well against Villa – and their albeit awful defence. We finally have Daniel Sturridge, Roberto Firmino and Philippe Coutinho healthy at the same time and this would be an opportunity wasted not to allow them to get more playing time together.

There is an argument for Sturridge to be wrapped in cotton wool, but that has not done him a lot of good so far. Perhaps consistent action is the best thing for him. Adam Lallana is not an option for the attacking trident as he nurses a calf problem – Klopp reported to Liverpoolfc.com.

Divock Origi, Joao Teixeira, Christian Benteke and Jordon Ibe could all be turned to off the bench if Klopp wishes to manage workloads. Steven Caulker and Flanagan, who can cover on both sides of the back four of course, will also likely make the final 18 at the WWK Stadium. 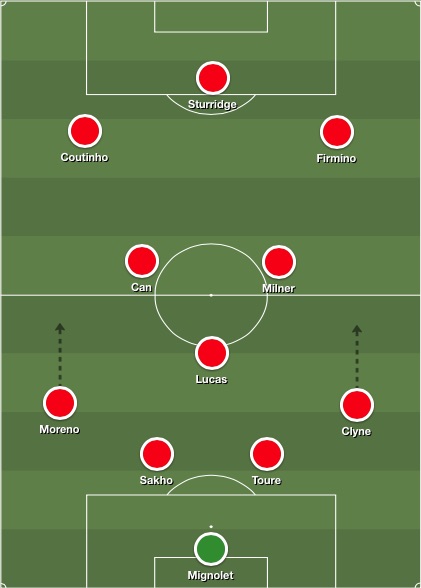