We’re predicting that Jurgen Klopp will pick the same side that drew 1-1 with Manchester United on Thursday to secure our passage into the Europa League quarterfinals.

We’re facing the ominous task of two ties against Borussia Dortmund, fresh off the back of thrashing Spurs – but before then – it’s an away tie to Southampton.

Of course, we’ve already won 6-1 at St. Mary’s in the League Cup this term, a match in which Divock Origi bagged a hat-trick and Daniel Sturridge notched a brace.

On Sunday, with most of Klopp’s squad jetting off for an irritating international break after the game, we can’t see the German making many changes.

Alberto Moreno missed the Europa League tie with a hamstring problem but it was only precautionary, and Klopp’s confirmed that he might be available for the weekend (via the Echo).

In his spot, James Milner deputised and did well, as Jon Flanagan was left out of the Europa League squad. Despite the younger pair being available for the Premier League tie, we reckon Klopp will stick with Milner.

The vice-captain did well at Old Trafford in this position, offering himself defensively and offensively. Klopp is not going to drop Adam Lallana from the right-wing after his superb recent outings, so the only way he’s getting Milner in the team is at left-back.

At a crucial point of the season such as this, we need the experienced, reliable names in the side – and Milner’s one of them.

Mamadou Sakho and Dejan Lovren have been excellent in central defence while Nathaniel Clyne will hope Southampton’s attackers give him a less torrid time than Anthony Martial did on Thursday.

Emre Can and Jordan Henderson can expect a battle with Oriel Romeu and Victor Wanyama, while our chances of winning will be defined by Coutinho, Roberto Firmino and Lallana behind Sturridge.

The striker’s not been great since his return from injury, and Divock Origi will provide legs from the bench if he fails to impress once again. 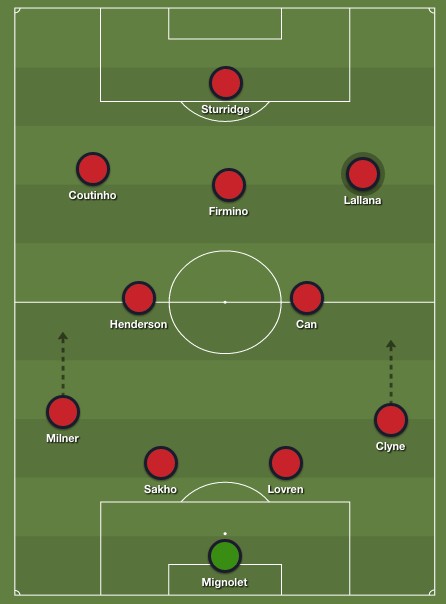