It’s the international break, which meant we thought we’d have a little fun and join some of the transfer rumour dots and forge a fantasy Liverpool XI for the 2016/17 campaign.

Jurgen Klopp will be promised vast sums this summer to forge his squad the way he wants, and we can see five proper first-teamers brought in. Actual starting XIs next term will change, develop and forge based on injuries, fitness and form of course – but our prediction targets the positions we need and the players we’ve been most noisily linked to.

Again, it’s unlikely we’ll get all of our top targets, although the fact Klopp’s in charge will dramatically help this.

What d’you make of our picks?

Every Liverpool fan will agree we need a new keeper, right? Mignolet’s too inconsistent and makes too many mistakes. Barcelona’s backup will be available by all accounts, and would provide a significant upgrade capable of playing out from the back. A fee of under £20m would be reasonable, considering he’s still only 23.

No need to replace Clyne, who’s been one of Liverpool’s most consistent players this term. Strong in defence, decent going forward and doesn’t get injured.

Martin Skrtel isn’t good enough, and in reality, this has perhaps been the case for the duration of his stay at the club. Sakho and Lovren have been excellent when paired together but Matip is arriving from Schalke – with a reputation as one of the best centre-backs in the Bundesliga. He’ll get a chance to impress, and if he does, there might be only one spot for Sakho or Lovren alongside him. Of course, if Sakho and Lovren’s partnership continues to grow – there’ll be no need to introduce Matip. Joe Gomez will also hope for minutes.

Alberto Moreno? Jon Flanagan? Brad Smith…? Perhaps Klopp needs to sign a top left-back – one we’ve not yet been linked to. Flanagan’s a great utility defender and despite the fact he’s signed a new deal, you get the feeling he won’t be a starter for Klopp long-term – who said the contract is better for Flanno than it is for the club. Moreno’s defensive ability, or lack of, has caused us too many problems, while Smith’s still raw. We’d love to see a move for Ricardo Rodriguez of Wolfsburg, although Lorient’s Raphael Guerreiro is also a target. We can’t yet pick!

CMs) Emre Can and Granit Xhaka

A first-team spot is Can’s. He’s improving week in week out and is now readily accepted as our most important central midfielder. We don’t think Jordan Henderson or James Milner will be guaranteed a starting spot next term, especially if we bring in another centre-mid. Xhaka’s the fantasy target. He’s technically superb but also a physical presence, and at 23 is only going to get better and better. Arsenal are also chasing Borussia Monchengladbach’s Swiss international, but Klopp’s knowledge of him from Germany could sway the deal. A fee of over £30m would be expected, but for us – he’s worth it. Marko Grujic is obviously also arriving to compete for a place, as potentially is Piotr Zielinski – the young Pole. As a result, both of Joe Allen and Lucas might not be here next term.

If we secure Gotze, attacking midfield will be the strongest and most exciting area of our team. In fact it perhaps already is with Adam Lallana playing well, but Gotze would be the jewell in the crown. He has a great relationship with Klopp already and has been strongly linked with a summer move for a few months now. Alongside Coutinho and Roberto Firmino, Liverpool could look a potent creative and goalscoring force from this area. Youngsters like Sheyi Ojo and Jordon Ibe bulk up the squad, while we’d like Lallana to stay and fight for a place alongside the returning Lazar Markovic.

We can’t see Klopp buying an out and out centre-forward this summer, providing Sturridge stays fit from now until the end of the season. He has the ever improving Divock Origi in reserve, Firmino – who’s shone as a false-9 – and the returning Danny Ings – so impressive at the start of the season. Liverpool need to get rid of Benteke for the maximum possible amount, along with Balotelli who is similarly surplus to requirements. 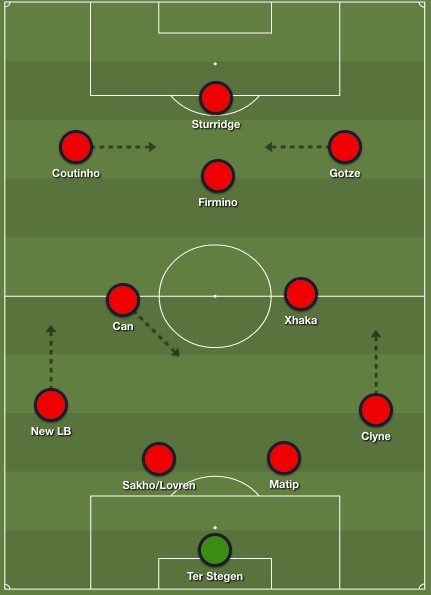