This is pretty spurious, but while we’re still on international break, we thought it apt to try and fit Mario Gotze into a potential Liverpool XI next term.

The media has gone mad today with news that a Liverpool switch is very much on the cards. The Guardian, Sky Sports and The Express all state it’s a big possibility with the player already setting his heart on reuniting with Jurgen Klopp.

So if we did pull off the potentially brilliant deal, where would the 23-year-old slot in?

In goal, rumours suggest Liverpool have already put a bid in for Marc-Andre Ter Stegen, which suggests Klopp is looking for competition for Simon Mignolet. Nathaniel Clyne’s spot at right-back is secure, although Jon Flanagan will provide great backup for either fullback berth. At the back, Joel Matip is coming in, meaning with Mamadou Sakho and Dejan Lovren already at the club – Liverpool have three centre-backs deserving of a starting spot already.

At left-back, Alberto Moreno hasn’t impressed sufficiently and a new starter could/should be brought in. Jonas Hector is a strong possibility.

In midfield Emre Can seems to have established himself an automatic starting spot in the middle, which means the likes of captain Jordan Henderson, Joe Allen and Lucas are all competing for one spot. Klopp’s signed Marko Grujic and is targeting Piotr Zielinski, so we’ve no idea yet who’ll be first choice alongside the young German.

Gotze arrives in the attacking midfield trio, given a freer role on the right next to Roberto Firmino and Coutinho. That’s mouthwatering. The ever improving Adam Lallana, returning Lazar Markovic, James Milner (who also provides a CM option) and hopefully Jordon Ibe/Sheyi Ojo should provide great bench/rotation options.

From this position, Gotze can get himself into the opposition box, play crosses, through-balls and interchange positions with our brilliant Brazilians.

Daniel Sturridge is our starting centre-forward, and we hope next term his injury problems are behind him. If not, Divock Origi or Roberto Firmino can play up front, or Klopp may also choose to bring in a new striker or have a long look at Danny Ings in pre-season. 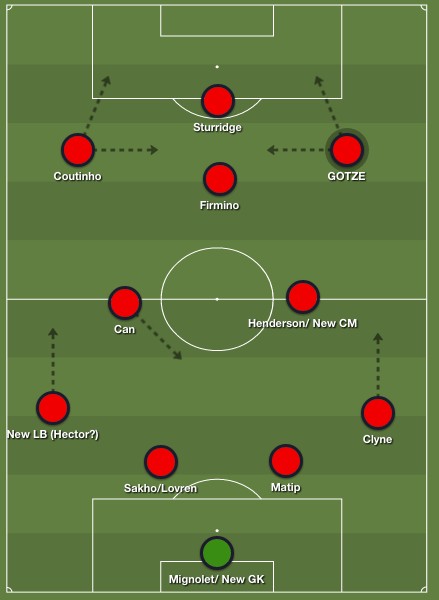 Mario Gotze a candidate to replace Xherdan Shaqiri in summer