Jurgen Klopp has somewhat of a selection headache ahead of this weekend’s Premier League clash at home to Stoke.

That’s Klopp’s two starting central midfielders unavailable for two Premier League games against Stoke and Bournemouth, and while Can will back for the Newcastle game, Henderson’s unlikely to feature again this season.

In their place on Sunday, we predict Klopp will bring Joe Allen into the starting XI, while pulling James Milner back into a central role to allow Roberto Firmino a natural spot back in the side…

Usually one of Milner or Adam Lallana would have to make way for the fit again Brazilian in attacking midfield, but with Milner dropping back and filling in centrally, all three can start – with Coutinho cutting in from the left.

Lucas is still injured, but there’s also the possibility Klopp will use the Stoke game to give one of Cameron Brannagan (recently scouted by Barcelona) or Kevin Stewart another opportunity.

Elsewhere, the manager could bring in Jon Flanagan at fullback to give either Alberto Moreno or Nathaniel Clyne a rest, and he’ll need to decide whether to bring Daniel Sturridge back into the team at the expense of Divock Origi as well.

On Sunday, we predict Liverpool will look something like this: 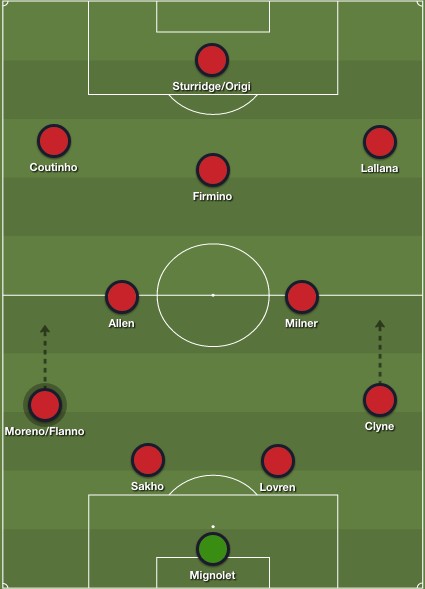