Jurgen Klopp has an in-form squad fighting for selection ahead of today’s match – the biggest so far of his Liverpool career.

The team he picked last weekend did very well to draw with Borussia Dortmund in Germany, but his changed side thrashed Stoke 4-1 at the weekend and a number of players put their names in the hat for the crunch Europa League second-leg.

At the back, it’s pretty easy. Simon Mignolet starts between the sticks, with Nathaniel Clyne and Alberto Moreno at fullback. The Spaniard put in one of his best performances of the campaign against Stoke, but will need to withhold some of his attacking instincts against the excellent Dortmund attack.

Mamadou Sakho and Dejan Lovren, so brilliant in the first-leg, will come back in for Martin Skrtel and Kolo Toure. Their first-choice pairing is pretty much confirmed from now until the end of the season.

Emre Can comes back in holding midfield, and with Jordan Henderson injured, Joe Allen should retain his spot in the team. Lucas is fit again, but Allen’s been so good in the past one and a half matches he’ll surely keep his place.

We think Klopp will go with the narrow, three-man midfield, which James Milner fits into seamlessly.

Up top, his choice becomes more difficult, with five players vying for three spots. Coutinho has to start, and Adam Lallana is likely to as well as Klopp trusts his work-rate in big matches. Divock Origi, having scored two in three and possessing superb physicality and running, is our favourite to lead the line – although it’s very possible Klopp will go with one of Roberto Firmino or Daniel Sturridge instead.

If we’re right, the bench should look something like this: 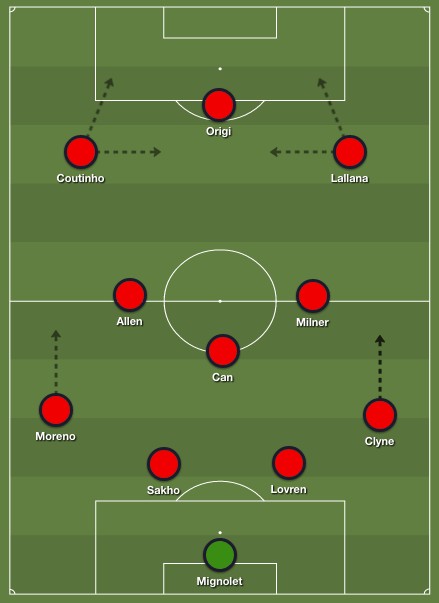