Danny Ings has been out for the entirety of Jurgen Klopp’s reign in charge of Liverpool, but the striker yesterday showed serious class off the field with a Facebook post.

The 23-year-old made a special request to Reds attending tonight’s Merseyside Derby, asking fans to give a young Everton fan with cerebral palsy, who’ll be sat in the Annie Road, end an easy time.

Back in February, James Ireland, known as JJ, was abused horrifically by Manchester City fans – who told his father he should have ‘drowned him at birth’.

This is absolutely disgusting, and as a result, two kind Liverpool fans gave James and his father tickets for tonight’s game in a show of solidarity.

“This really is make or break for him. He is absolutely petrified but an Alder Hey specialist told me we have to fight fear with fear,” James’s mum told the Echo.

“Stewards at the ground say they will be keeping a close eye on him – and will pull him out if needed.”

Please, Reds. Let’s show this kid the respect he deserves and prove what kind of club we are. 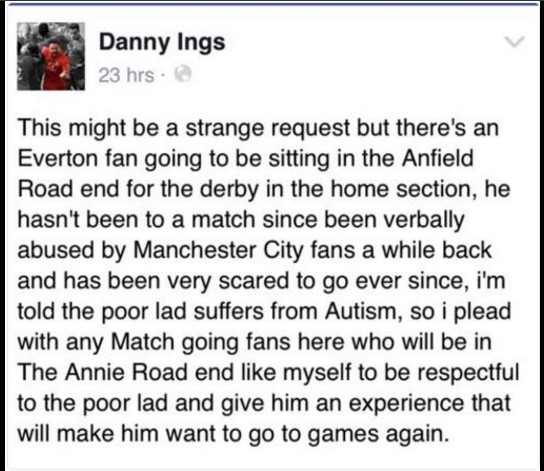