From now until the end of the season, you get the feeling Liverpool will be deploying two different sides, playing alternately, to make sure the players are fit for our priority competition: the Europa League.

Klopp picked a ‘weakened’ side against Stoke, a strong one against Dortmund, and a weakened XI against Bournemouth – meaning he’ll be able to select his best side for the Merseyside Derby.

This will enable him to rest players for the Newcastle tie at the weekend before picking the first-choice side for the Villarreal clash next week.

If we’re right, and Klopp’s recent choices suggest we are, we’ll see a side that looks a little something like this today against Roberto Martinez’s Everton team: 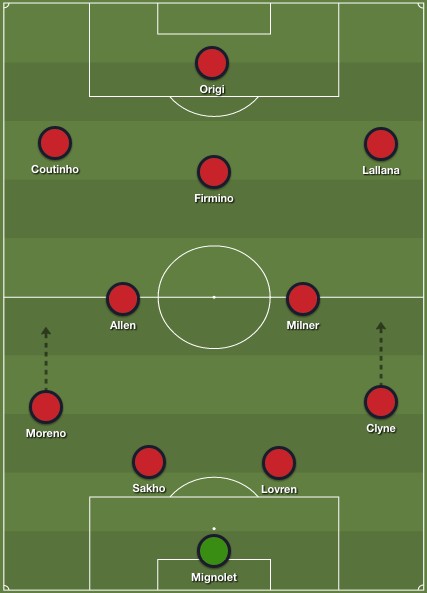 This means an entirely changed back five from the Bournemouth win, with Simon Mignolet starting behind Nathaniel Clyne, Alberto Moreno, Dejan Lovren and Mamadou Sakho.

With Jordan Henderson and Emre Can injured, Klopp will likely keep Joe Allen in the side following his excellent recent form. He deserves a midfield start ahead of Lucas right now, and should be fresh after barely featuring during the first half of the campaign. Kevin Stewart should play against Newcastle at the weekend instead. James Milner slots in naturally alongside Allen, meaning Klopp can select Coutinho and Adam Lallana on the flanks in his 4-2-3-1 formation.

The manager has to pick two from three of Daniel Sturridge, Roberto Firmino and Divock Origi for the remaining spots, and despite Sturridge’s superb recent form, Klopp’s rarely uses him twice in a week from the start.

For this reason, we predict he’ll go with Firmino and Divock Origi, but use Sturridge from the bench.

There’s a chance Sturridge’s recent form is considered too good to ignore of course, and the striker could be pairs with Origi in a very ambitious XI, with Firmino on the bench.