Liverpool boss Jurgen Klopp has been very consistent on not choosing to start Daniel Sturridge twice in a week, regardless of the striker’s form.

Before yesterday’s Merseyside Derby win, the German told the Echo he wouldn’t treat Sturridge ‘like an orange’, squeezing every bit of juice out of him – but use him cautiously to protect the forward’s gradual return to 100% fitness.

Of course, Sturridge missed most of last and this season with various injury problems, so Klopp’s plan is a smart one, despite the forward’s pleas for more minutes.

The likely plan over the next few weeks was to rotate Divock Origi and Sturridge in alternate games, meaning Sturridge would have started this weekend against Newcastle, and the young Belgian would come in for the tricky away Europa League leg against Villarreal.

But with Origi injured, and Christian Benteke and Danny Ings not yet available, Klopp has a decision to make this weekend. Expect him rest most of the side he wants to start next Thursday, so this means that Sturridge will surely stay on the bench to and be kept fresh for Villarreal. With no Origi, Sturridge has to lead the line against the Spaniards, and Klopp can’t risk his fitness in the Premier League.

If this proves to the case, Roberto Firmino is the only real option up top. Jordon Ibe and Sheyi Ojo can continue on the flanks, but we think Joe Allen will come in and play an advanced midfield role to enable Coutinho, Adam Lallana and James Milner a rest.

Kevin Stewart and Lucas can hold, as the Brazilian’s not had many matches recently, and his experience will be valuable centrally.

At the back, we’re expecting three changes from the back-five that beat Bournemouth. Jon Flanagan surely deserves an opportunity over Connor Randall, while Martin Skrtel should be fit to start alongside Kolo Toure at centre-back. Brad Smith allows Alberto Moreno a rest at left-back, while we think Simon Mignolet will start ahead of Danny Ward. The no.1 barely touched the ball against Everton and it’s not like goalkeepers need rest. Ward did well last time out, but while we can still mathematically get top four, it makes sense to choose our best stopper.

If we’re right, Liverpool could line up something like this on Saturday: 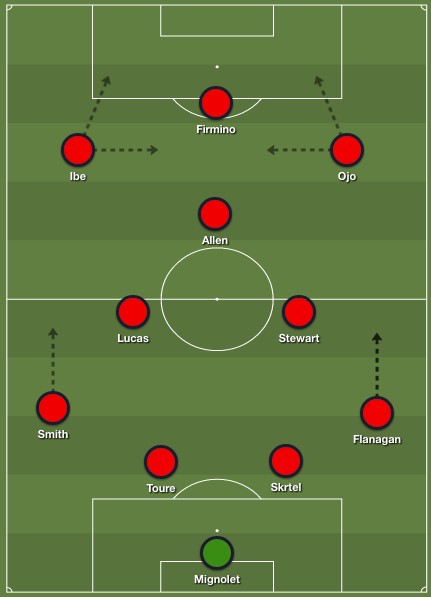 Football News 24/7
‘Every superlative I could say’ – Ex-Red marvels over Liverpool target who is looking ‘absolutely sensational’
November 25, 2022 10:00
Liverpool can repeat Sturridge transfer trick by capitalising on growing Chelsea problem
November 17, 2022 15:29
Editor’s Column: Roberto Firmino’s new contract – smart choice or a familiar mistake…?
November 16, 2022 13:22
(Video) “Gentleman!” – Dalglish makes Skrtel hair joke as pair reunite
September 24, 2022 8:59
“He’s a great player” – Liverpool youngster has a big fan in Roberto Firmino
September 10, 2022 15:42
“See you soon!” – Martin Skrtel announced as latest player to join Liverpool Legends squad to face Manchester United
August 26, 2022 15:13
Sheyi Ojo joins Cardiff City after being released by Liverpool earlier this summer
July 14, 2022 10:03
Martin Skrtel on why he thinks Sadio Mane left Liverpool and admits that he ‘also had that feeling’ before his departure
July 5, 2022 15:23
Martin Skrtel explains what the ‘perfect step’ for Liverpool would be when Jurgen Klopp leaves the club
July 4, 2022 21:42
‘It’s nuts man’ – Daniel Sturridge explains why FSG took over at Liverpool instead of any other club
June 17, 2022 14:43