Carlisle vice-president Andy Bell, also the owner of Bookies.com and FootballScores.com, made unsavoury jokes about the Hillsborough disaster yesterday, as the inquest announced fans were not to blame for the deaths of 96 people.

His tweets have since been deleted, but here’s what was initially sent out. 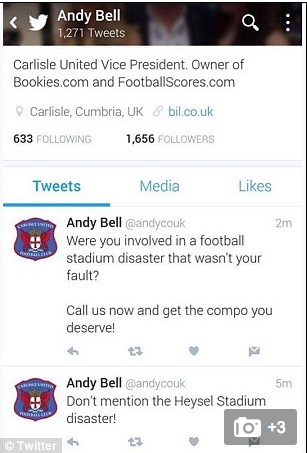 Naturally, Bell pathetically claimed he was hacked afterwards. Why would somebody hack you, Andy Bell, possessor of 1,656 followers, and make Hillsborough remarks?

It’s genuinely farcical how people who are called up for unsavoury Twitter behaviour can make this farcical excuse, yet Bell did after a huge early backlash.

“Back in the room! First time I have ever been hacked although it looks like nobody believes me,” he claimed.

His League Two club released a statement distancing themselves from the tweets, but seemingly are standing by his ‘hacked’ defence.

“We would never condone comments or sentiments like that. We believe Mr Bell has made it clear that it was a hack on his account,” they told the Daily Mail.

“He is dealing directly with Twitter to resolve this and any further comment can be made by Mr Bell.”

It sickens us that a man in this position felt it appropriate to first make these remarks and then lie about making them.

Saying that, the struggle of the past 27 years shows we’re being naive to expect those in positions of authority to act properly.