Liverpool will be without Emre Can, Jordan Henderson and Divock Origi through injury against Villarreal, while Mamadou Sakho hasn’t travelled due to the investigation into his failed drugs test.

As a result, Jurgen Klopp is without four players who would have surely started the Europa League semi-final had he had his whole squad available.

But this provides an opportunity for other names to come in perform.

Against the Spaniards, Simon Mignolet is obviously going to start between the sticks, although we cannot afford another mistake like the one we saw at home to Newcastle the weekend just gone.

Nathaniel Clyne got a rest against the Toon and will be fresh to come in at right-back, while Alberto Moreno will start at left-back – with experience of facing this opposition from his time in La Liga.

Dejan Lovren is an automatic starter in central defence, but Klopp must decide who to partner him with – Kolo Toure or Martin Skrtel. We predict he’ll go with the Ivorian, with Skrtel out of favour at the moment.

In midfield, it’s two spots between James Milner, Lucas and Joe Allen. The latter maybe deserves to start, but Klopp’s rarely selected him during bigger games, so we think the more sturdy pairing of Milner and Lucas will play from the offset.

The three attacking midfielders pick themselves: A rested Coutinho on the left, Roberto Firmino at no.10 and Adam Lallana on the right.

Without Origi, Daniel Sturridge is a certainty for the striker position, meaning we think the side will start something like the graphic we’ve made below. 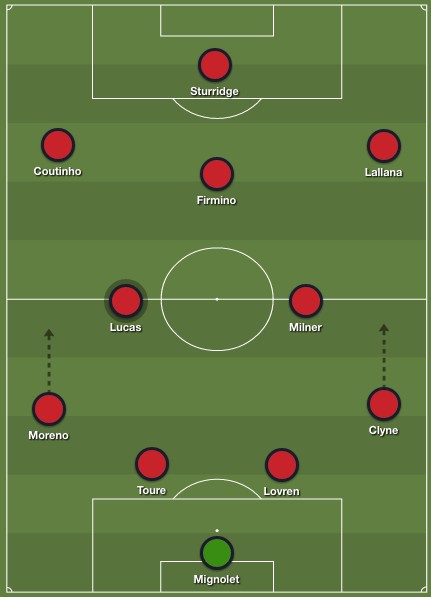