With Liverpool only having arrived back from Spain early on Friday morning, Jurgen Klopp’s first-choice players will have had virtually zero preparation time for Sunday’s trip to Swansea – which kicks of at an absurdly early 12:00.

As a result, we’re convinced he’ll choose an entirely changed XI in order to maximise our best players’ fitness levels – ahead of the biggest game of the season next Thursday when we host Villarreal at Anfield.

In goal, Danny Ward should come in for Simon Mignolet. Klopp’s indicated the Welshman will feature once more this season, so Sunday seems the perfect opportunity.

At the back, four available defenders will surely come straight in for those who played in Spain. That means Connor Randall for Nathaniel Clyne, Brad Smith for Alberto Moreno, Martin Skrtel for Dejan Lovren – and perhaps Tiago Ilori for Kolo Toure.

We’re going with Ilori over Steven Caulker, who Klopp seems to have forgotten exists.

Jordan Henderson and Emre Can are injured in central midfield, so with Lucas, James Milner and Joe Allen currently taking up the usual starting berths, there’s spots for three youngsters: Kevin Stewart, who’s been used regularly, and Pedro Chirivella and Cameron Brannagan – who were more prominent earlier in the season in the Cup fixtures.

Jordon Ibe and Sheyi Ojo are natural choices for the flanks, while Christian Benteke’s one minute cameo in the Europa League hopefully suggests he can lead the line – keeping Daniel Sturridge fit for Thursday.

With Sturridge not playing against Villarreal first time out, there’s a chance he could play on Sunday and next Thursday – with Liverpool surely needing an injection of his goals. 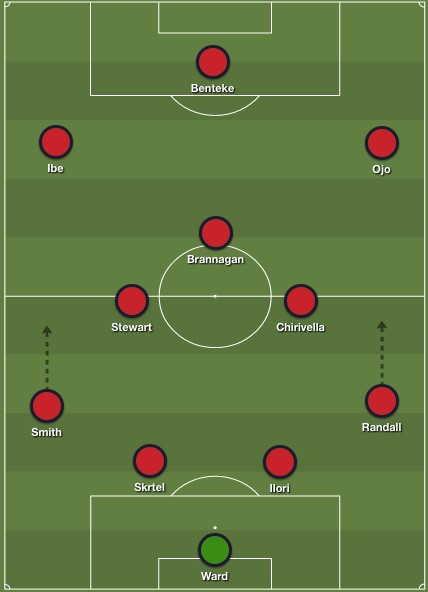 ‘Always’ – Pedro Chirivella thanks LFC after Nantes transfer is confirmed