It’s been nigh on impossible to predict exactly what side Jurgen Klopp will select in recent weeks, as he’s always pulled a few surprises.

Nobody expected him to leave out Daniel Sturridge last week, and the decision was debated by fans and pundits alike following the 1-0 loss – despite the fact we dominated the game and were very unlucky.

Against Villarreal this evening, we think it will be impossible to leave him out due to the fact we have to turn around a one goal deficit.

This means Simon Mignolet in goal, with Nathaniel Clyne and Alberto Moreno at fullback. Dejan Lovren is an automatic selection, while Kolo Toure is likely to slot in beside him – despite the possibility Lucas will get the nod.

In midfield, Emre Can is fit, training, and for us – simply has to be selected. He provides the legs, energy and power we’ll desperately need to overrun the Spaniards. Klopp could use Lucas alongside him to shore up the centre of the park, but that means benching one of the attacking midfielders.

For this reason, Lucas might start on the bench himself, enabling James Milner a central berth alongside Can. This is what Klopp went for in the home leg against Dortmund, who are a much, much bigger attacking threat than Villarreal – so should be brave enough to do it again.

If this is the case, Joe Allen and the Brazilian can be brought from the bench to add more numbers centrally if the game plan isn’t working. The Welshman has been excellent, and if we’re struggling to maintain possession, Klopp will surely turn to Allen.

If we goes with Can and Milner to begin with, the exciting attacking midfield triumvirate of Adam Lallana, Coutinho and Roberto Firmino – the latter of which badly needs to put in an improved performance on what we’ve seen lately.

What side do you think Klopp will go for, Reds? And what about yourselves? 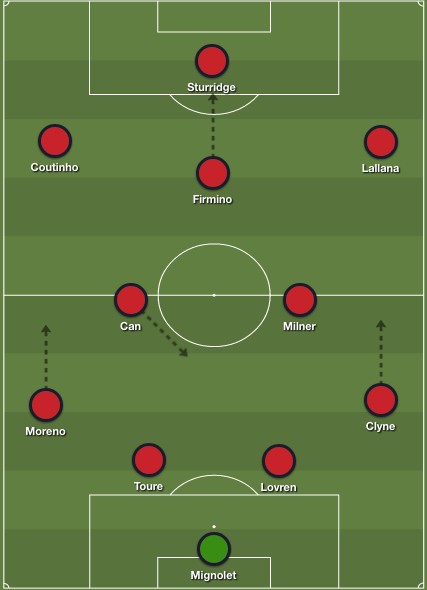