Predicting Jurgen Klopp’s ‘rotation’ sides for our less important Premier League matches is a very difficult task, but the best way of starting is to take away most of the players who’ve just featured the Thursday previous…

Midweek we battered Villarreal 3-0 to progress to the Europa League Final, and countless players put in spellbinding individual performances, although the team was the real star.

Our chances of qualifying for next season’s Champions League rely solely on the Sevilla clash in ten day’s time, and this Watford games provides Liverpool another chance to test some of the squad members as a result.

Klopp will not allow his side to put in a performance as abject as the Swansea defeat last time out though, so we can see him going a little stronger.

Of the back five though, we can only see Dejan Lovren keeping his place, with Danny Ward, Connor Randall, Brad Smith and Martin Skrtel coming in. Kolo Toure needs a rest, as do the fullbacks, who do enormous amounts of running.

Lucas and Joe Allen can replace James Milner and Emre Can, while we think Cameron Brannagan might get a first Premier League start alongside the experienced duo. The youngster watched Pedro Chirivella start last week in Wales, and has seen Kevin Stewart play on a number of occasions, but it’s perhaps his turn to play from the offset.

If our attacking midfielders (Coutinho, Adam Lallana and Roberto Firmino) are getting a rest, our young wingers Jordon Ibe and Sheyi Ojo come in on the flanks – with Christian Benteke likely to start following his goal last week.

There’s also the chance Adam Lallana or Roberto Firmino will play at no.10, without Brannagan, but bar that selection, we think this side will be pretty close to the one Klopp goes with.

An Anfield win will keep the momentum going, with Chelsea at home just three days later. In that game expect more of the big names to return. 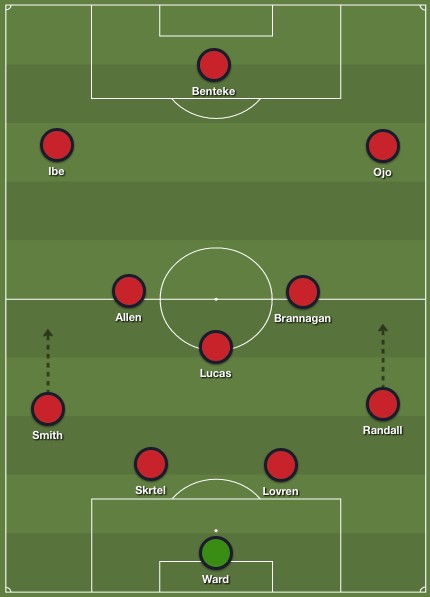