The 18-year-old winger laid on Roberto Firmino for Liverpool’s second goal in the 2-0 win at Watford.

Remarkably – and I write this statistic with a big grin on my face – the teenager has already supplied more top-flight goals this season than Raheem Sterling has in his 31 appearances for Manchester City! 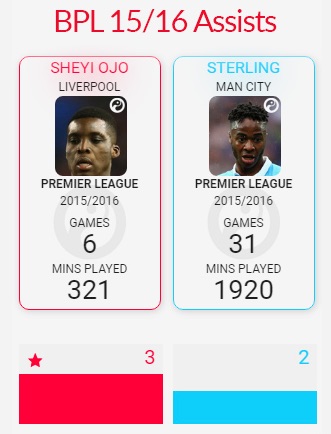 Ojo also provided our only goal in the 3-1 defeat to Swansea City, but the pick of his assists was undoubtedly this outrageous piece of skill and cross for Daniel Sturridge against Stoke City.

Liverpool tweeted a reminder of the assist today, as if they had seen the above graphic themselves!

A closer look at that bit of skill & final product from @Sheyi_Ojo… pic.twitter.com/p0AKXcU2Zu