We rested multiple names for the 2-0 victory over Watford at the weekend, including Nathaniel Clyne, Emre Can, James Milner, Adam Lallana and Daniel Sturridge – and you can expect those names to return today for the trip of an old foe.

“We had a few changes and most of the players who play [on Wednesday] will be in good physical shape,” Klopp told yesterday’s press-conference, reported in the Independent.

“I’ve learned to rotate; I’m not the world champion at this but I’m not too bad, and we will be ready 100 per cent for the final.

“Sevilla changed 11 positions in their last game. They are already preparing for the final but we cannot do this because we are not in a fixed [League] position.”

Simon Mignolet is a certainty to start in goal with Danny Ward ruled out with a cruel injury which will keep him out of the Euros.

The back four should be the same one you’ll see in the Europa League Final in a week’s time. This means Clyne and Alberto Moreno at fullback, with Dejan Lovren partnering Kolo Toure at the back. The ageing Ivorian’s performances have put him ahead of Martin Skrtel in the centre-back pecking order, while Lovren is now regarded as Liverpool’s best defender.

In midfield, fit again Emre Can should return alongside James Milner in the double pivot, providing the team a defensive, physical base from which they can perform. As always, Joe Allen provides a different, passing option from the bench.

The standard attacking midfield triumvirate of Coutinho, Roberto Firmino and Adam Lallana is in-form, dangerous and hard-working – and we hope it’s this area where we’ll beat Chelsea tonight.

Daniel Sturridge is fresh having missed the weekend win, so should come in for Christian Benteke centrally. 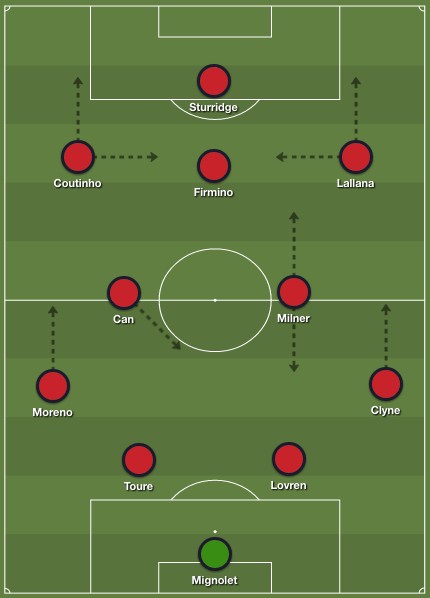