We reckon Jurgen Klopp will field an entirely different team today than the one he selects on Wednesday for the Europa League Final, bar the goalkeeper.

With Danny Ward crocked, and keepers not really needing to rest, Mignolet will start between the sticks, but the rest of the side will surely be a mix of experienced players who spend most of the time on the bench and youngsters.

At the back, Nathaniel Clyne and Alberto Moreno will surely get a rest, meaning Jon Flanagan and newly crowned Academy Player of the Year Brad Smith can start at right-back and left-back respectively.

In midfield, it makes sense to bring in anchorman Kevin Stewart and Joe Allen, allowing Emre Can and James Milner a break before the Sevilla clash. Captain Jordan Henderson is likely to feature from the bench, but we’re not sure he’s ready to start.

Adam Lallana, Coutinho and Roberto Firmino are guaranteed to play in Basel, so Liverpool’s boss could give youth another chance in attacking midfield.

The impressive Sheyi Ojo, with four assists so far in his few outings, should start on the right, while Sergi Canos might be given a debut having returned from his loan spell at Bournemouth. Jordon Ibe played no.10 last weekend against Watford, and we can see him doing the same again.

Up top, Christian Benteke is likely to start, while Danny Ings could finally make an appearance from the bench, having yet to represent Klopp following a lengthy debilitating ACL injury. 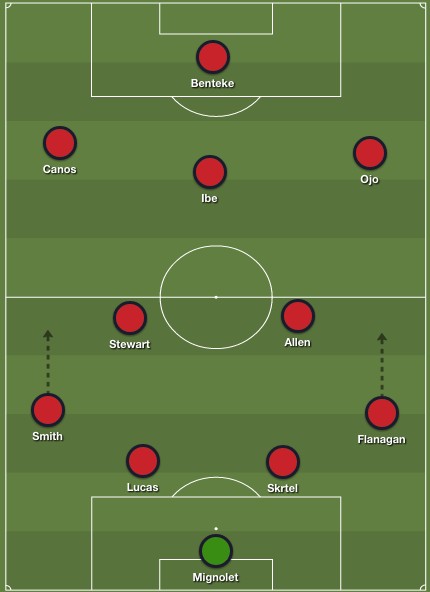