Although the biggest game of Liverpool’s season awaits on Wednesday, our Premier League campaign is now over, and that means another long summer off for the fantasy football managers among us.

Playing the Premier League’s official fantasy football game, I endured a tough season. I was battling relegation in one of my personal leagues, and settling for mid-table mediocrity in the other.

And that may be because I had the wrong Liverpool players in my team.

As this table of the top 10 Liverpool points scorers in the game shows, Roberto Firmino was the Red to have. The Brazilian forward accumulated 155 points, courtesy of his 10 goals and eight assists. 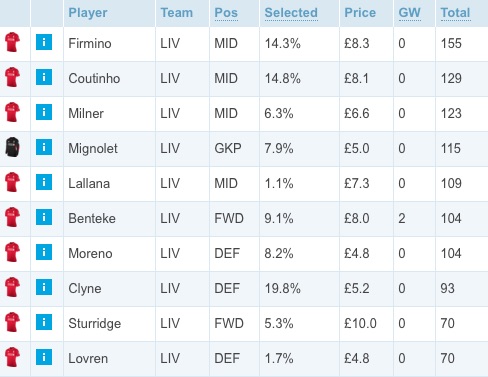 James Milner’s 2016 assist spree sees him join Firmino and Philippe Coutinho in the top three. Adam Lallana also made the top five and could have been more popular among the virtual bosses.

The value-for-money pick at Anfield was Simon Mignolet. Although he had an indifferent season, the Belgian goalkeeper’s 11 clean sheets helped him to 115 points, and only for the cost of £5m.

Managers who gambled on Christian Benteke at the start of the season, and forgot to transfer him, out might be pleasantly surprised to learn that the out-of-favour striker still earned 104 points.

Daniel Sturridge was only the ninth highest Liverpool points scorer, but had a better points-per-match ratio than everybody but Firmino, racking up 70 points in his 14 appearances – five per game.

The Reds players to avoid were Emre Can and Nathaniel Clyne. The England defender collected 93 points, but that is a disappointing return for somebody who started 33 league games this campaign.

And, while Can may be a fantastic player for Jurgen Klopp, he is less effective in the fantasy format, with his one goal and one assist providing a measly return of only 65 points from 30 appearances.

Lessons learned for next season; Firmino as captain, no Can and get Sturridge in when he’s fit.