Mario Gotze is only 23-years-old, but astonishingly, he’s already picked up five Bundesliga titles: three for Bayern Munich and two for Borussia Dortmund.

The German World Cup winner bagged a brace at the weekend when given a rare start by departing manager Pep Guardiola, hopefully an indication of what he could achieve in a Liverpool shirt.

Gotze’s Instagram post showed no signs of a player set for an exit, but it looks for all the world that the uber-talented playmaker is set for pastures new.

His caption translates as: ‘Happy. 5 times! Journey! We are masters!’ 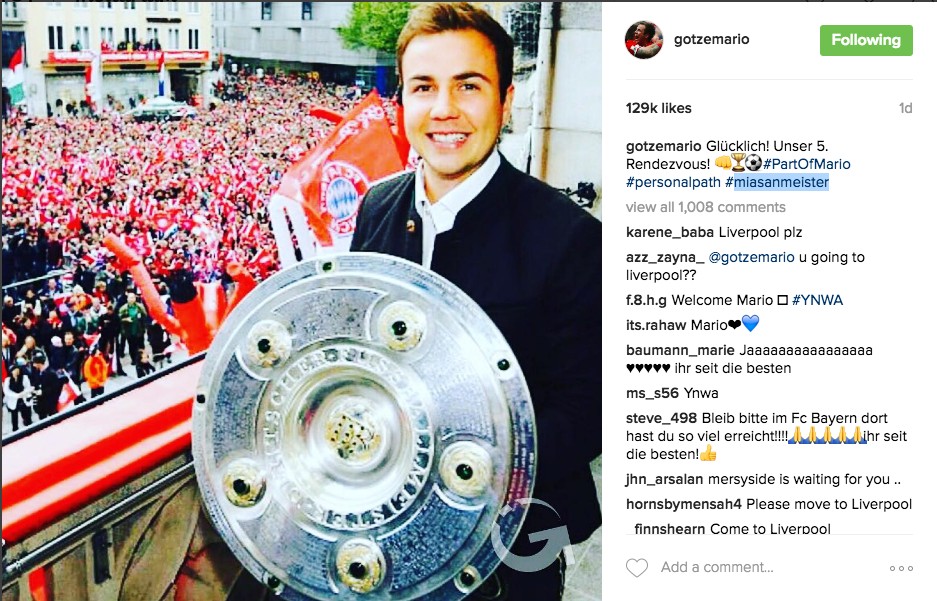 Despite the multiple accolades, incoming Bayern boss Carlo Ancelotti has told Gotze he’s surplus to Bavarian requirements, and that he can join a new club this summer.

This is reported in multiple publications, including the Mirror, who quote our Brazilian no.11 Roberto Firmino on the possibility of Gotze signing.

Normally, players distance themselves from such speculation, but Firmino was more than happy to wax lyrical over his former Bundesliga opponent.

“Also Gotze I still know well from my time in Germany, when I played with Hoffenheim against Borussia Dortmund and Bayern,” he began.

“He has incredible qualities in attack.

“He would fit in well with us and will surely help us with his class also.”

The thought of Gotze slotting into an attacking midfield three with Coutinho and Firmino, with the option of Adam Lallana, is mouthwatering, in short.

He’s technically superb and can score and create goals at will when on-song. At 23, he’s got plenty of time to resurrect his career which was stagnated in his homeland, and we’re backing him all the way to do it on Merseyside.