For maybe the first time all season, everyone knows exactly what team Jurgen Klopp will select for tonight’s Europa League Final with Sevilla.

The German rested all of his starting players for the weekend draw with West Brom, meaning our best XI should be fresh and ready for the challenge which lies ahead in Basel.

In goal, Simon Mignolet will start, keen to make up for his blunder in the League Cup Final earlier this season which cost us against Manchester City.

At the back Nathaniel Clyne and Alberto Moreno come in for Jon Flanagan and Brad Smith, while Dejan Lovren will partner Kolo Toure at centre-back. With the Ivorian’s contract expiring, it’s likely to be Toure’s last game in a red shirt.

Jordan Henderson is back fit and Joe Allen has been in decent form, but Klopp will surely go with the midfield double pivot which performed so heroically at home to Villarreal in the semi-final: Emre Can and James Milner. The German will sit and allow Milner more freedom to drive forward and help in attack.

According to James Pearce of the Echo, the front four is nailed on – with Klopp not considering bringing Divock Origi back from injury straight into a final. That means Adam Lallana on the right, Roberto Firmino at no.10, Coutinho cutting in from the left and Daniel Sturridge up top.

This XI exactly mirrors the team that beat Villarreal and drew with Chelsea, but this time, our bench is likely to be much stronger.

The only real decision to make is whether to pick winger Ibe or centre-back Skrtel on the bench, as Lucas can cover at the back. We think he’ll go safe with Skrtel, as Origi can play wide. 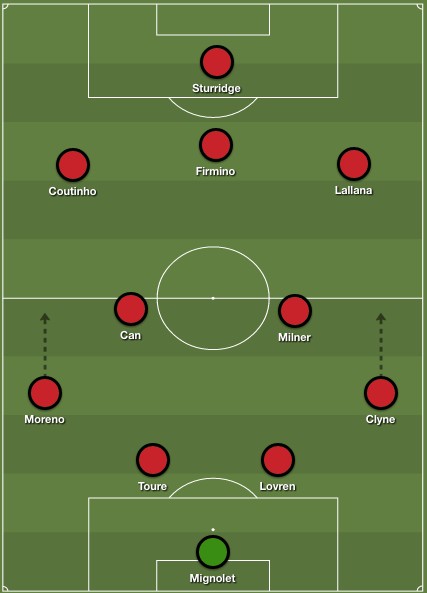